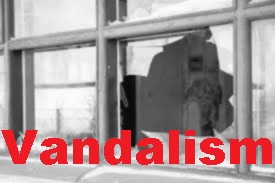 Shortly before 6:00 o'clock Wednesday morning, police were called to a barber shop on North Maple Street in reference to a shattered front plate glass window with graphics painted on it. The crime was discovered when a barber opened the business.

Then shortly before two o'clock Wednesday afternoon Murfreesboro Police were called to Taco Bell on South Church Street. When Officer McGriff arrived, a woman said that an unidentified male wearing a black hoodie was screaming profanity at her and others at the restaurant's drive-through. She claimed that the male approached her vehicle, and angrily slammed his fist into her car's window.

The police report shows that damage was visible on the passenger side window of the 2006 Nissan Altima.

No surveillance video was available, and no additional witnesses were located.

A third vandalism report was filed by a resident who lives on Shafer Drive near Scales Elementary School. The woman told police that she noticed her mailbox had been knocked down and that tire marks were visible in the front yard.