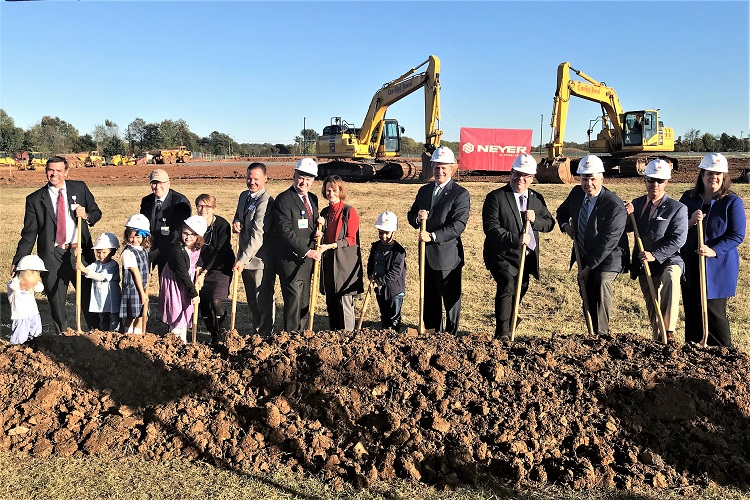 Groundbreaking for the Vanderbilt University Medical Center's Pediatric Clinic and Ambulatory Surgery Center took place at 4:00 o'clock Monday afternoon (10/29/2018). The site is on Garrison Drive, across from the Murfreesboro Medical Clinic, behind New Vision Baptist Church. Scroll down for land location photo.

Earlier this year (3/15/2018), the Murfreesboro City Council voted to authorize the sale of city-owned real estate in the Gateway Project area to Vanderbilt University Medical Center.

Vanderbilt Medical Center told the Murfreesboro council that they would construct a single story, 37,500 square feet Pediatric Clinic and Ambulatory Surgery Center as Phase 1. Construction on the $21 million investment, including land and equipment. Phase 1 would also include approximately 190 ground level parking spaces.

Another possible improvement to the area would be to extend Northfield Boulevard, between the Ford auto dealer and Georgetown Square Shopping Center, with another bridge over Broad Street, crossing the Stones River. As part of the sale to Vanderbilt, the city is accelerating the construction of the segment from Gateway Boulevard to North Thompson Lane. It is anticipated that the proceeds of the sale to Vanderbilt will more than offset the cost of constructing this segment of the Northfield extension.

Vanderbilt University Medical Center would initially employ 14 medical doctors and nurse practitioners and staff of between 40 and 50 people with a payroll of approximately $8 million. Phase 2 of this development would expand the building from 37,000 to 100,000 square feet and add between 120 and 150 jobs with an estimated annual payroll of $24 million and a total capital investment of $51.5 million. This future phase is anticipated within the next 10 years.

Monroe Carrell Jr. Children's Hospital at Vanderbilt already has a Children's Specialty and After-Hours Clinic on Kennedy Drive off Medical Center Parkway, which hospital officials say will not be impacted when the Vanderbilt University Medical Clinic opens the new facility on Garrison Drive.