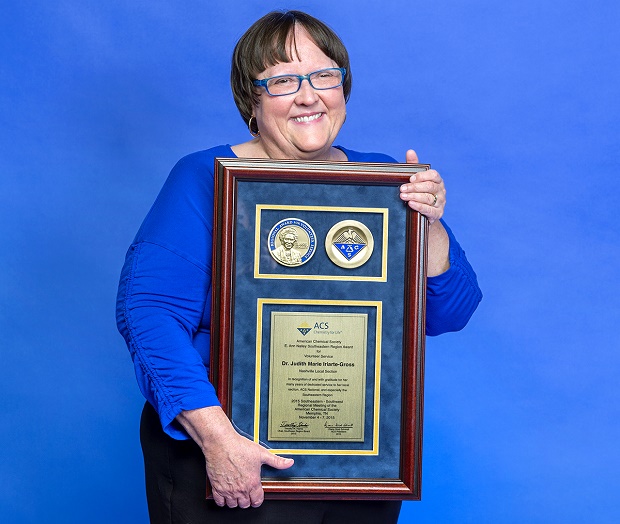 MTSU chemistry professor Judith Iriarte-Gross poses with the American Chemical Society's E. Ann Nalley Southeastern Regional Award for Volunteer Service that she received this past spring. The society has now included Iriarte-Gross in its 2016 class of American Chemical Society Fellows for her outstanding achievements in and contributions to science and her profession. (MTSU file photo by Andy Heidt)

It only took a moment for Judith Iriarte-Gross to open the envelope that arrived in the mail at her Murfreesboro home.

For the MTSU faculty member, the contents divulged wonderful news that took years and decades of striving to achieve success in the chemical world and chemistry classroom for the dividend to be realized.

Neil D. Jespersen wrote to inform Iriarte-Gross she had been selected as a member of the 2016 class of American Chemical Society Fellows.

The ACS Fellows Program was approved in 2008 by the ACS board of directors to honor its members for outstanding achievements in and contributions to the science, profession and the Society, said Jespersen, the chair of the ACS Fellows Oversight Committee, in a portion of the three-paragraph formal letter.

"Once again, please accept my heartiest congratulations on being named an ACS Fellow," Jespersen added. "Thank you for your contributions to the chemical enterprise and to the ACS community."

The 2016 class of ACS Fellows will be honored in a ceremony during the ACS national meeting from 2 to 4:30 p.m. Monday, Aug. 22, in Philadelphia, Pennsylvania. The full list of fellows will appear in the July 18 issue of Chemical & Engineering News.

"It's an extreme honor to be recognized for the volunteer work I do for the ACS," Iriarte-Gross said of the newest honor to come her way.

"This award recognizes Dr. Gross for her service to the American Chemical Society as well as her achievements in teaching and research," Fischer said. "Such awards also serve as further evidence of the quality of faculty who have chosen to invest their careers in Middle Tennessee State University and the students and public that this university serves."

She was nominated by Ann Nalley, a chemistry professor at Cameron University in Lawton, Oklahoma, ACS president in 2006 and "a good mentor and role model for all women in chemistry," Iriarte-Gross said.

Director of the MTSU Women in STEM (WISTEM) Center and Expanding Your Horizons in Math and Science, Iriarte-Gross became a member of the ACS Committee of Minority Affairs this year and serves on the ACS Leadership Advisory Board.

"The nominating committee asked me for my resume and what I do outside of ACS," she said. "When they heard about my involvement with EYH (middle and high school girls' event celebrating its 20th anniversary Oct. 22), GRITS (Girls Raised in Tennessee Science), the WISTEM Center and DigiGirlz (all-girl event annually held in Franklin, Tennessee), they knew I had a lot to offer outside and inside the American Chemical Society."

During the academic year, Iriarte-Gross teaches Honors physical science classes, combining chemistry, physics, geology and astronomy into a total package for students. She joined the MTSU faculty in 1996 after working for the Food and Drug Administration in Texas and as a lab manager in the plastics industry.

In 2013, the University of Maryland (bachelor's and master's degrees) and University of South Carolina (doctorate) graduate was nominated for the Presidential Award for Excellence in Science, Mathematics and Engineering Mentoring.