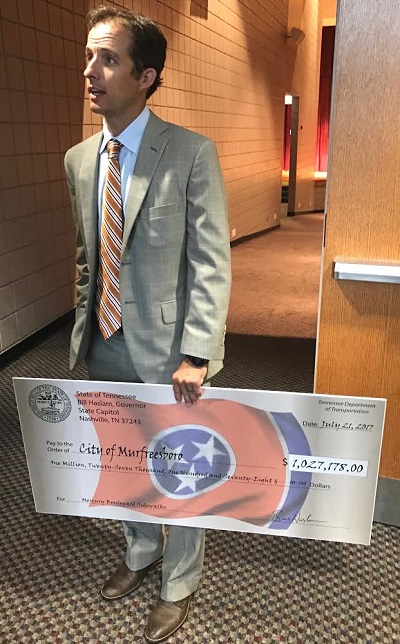 The Murfreesboro grant of over one-million dollars will be used to construct sidewalks on Mercury Boulevard between Southeast Broad and Middle Tennessee Boulevard...

The governor says it's not part of the IMPROVE Act, which passed the state legislature last year...

The Transportation Alternative Grant program provides federal money via the Tennessee Department of Transportation to build sidewalks, bike and pedestrian trails and to renovate historic transportation-related structures such as train depots.

The governor was at Patterson Park Community Center Friday to present a check to the City of Murfreesboro. The new sidewalks will be along the stretch of Mercury Boulevard where the recreation center is located.

Governor Haslam speaks to the media following the TDOT announcement about the federal grant for sidewalks on Mercury Boulevard, healthcare and more.

Governor Haslam along with Murfreesboro Mayor Shane McFarland and State Senator Jim Tracy announce a federal grant of over one-million dollars for sidewalks on Mercury Boulevard.

Governor Haslam is at Patterson Park with a major TDOT announcement.