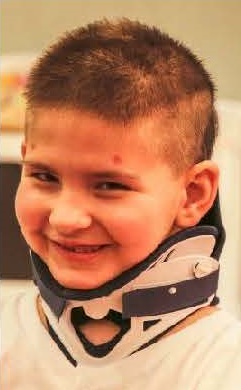 There was a heartwarming homecoming Saturday in Unionville as the 6-year old victim of a tragic crash here in Murfreesboro returned home from specialized treatment. His whole community turned out--along with the first responders who saved his life.

Six-year-old Camden Collins will be welcomed home by family, friends, first responders, and caregivers at Community High School after spending several weeks recovering from injuries related to a vehicle accident.

The welcome home included a benefit concert and silent auction with proceeds to help pay for the youngster's ongoing rehabilitation and recovery.

Camden's life was forever changed on the evening of January 4, 2017. He and his parents, Michael and Suzanne Collins of Unionville, were involved in a motor vehicle accident on Highway 99 near Armstrong Valley Road.

Murfreesboro Fire and Rescue was one of the first on the scene. Firefighter Greg Burt is being hailed a hero for carefully removing Camden from the wreckage. He shared some special words for Camden with NewsChannel 5...

According to the Tennessee Highway Patrol report, a vehicle driven by 59-year-old Ronald Smith of Eagleville, crossed over the center line and hit the Collins' car head-on in the westbound lanes. Camden's parents, as well as Smith, lost their lives in the accident.

Camden, properly restrained in a child safety booster seat, survived the tragic crash. However, he sustained several serious injuries that were unimaginable for any person to endure, not to mention such a young boy.

He was rescued from the vehicle by Murfreesboro Fire Rescue Department crews with the assistance of the Tennessee Highway Patrol, and was also cared for by Rutherford County Emergency Medical Services before being flown in critical condition via LifeFlight to Monroe Carell Jr. Children's Hospital at Vanderbilt.

According to Camden's grandmother and now permanent guardian, Kim Kee, Camden suffered a spinal cord injury (C-2 and C-3), five broken ribs, and a severe laceration to his groin, in addition to the grief of losing his parents. Camden underwent surgery at Vanderbilt and was placed in a halo device to assist with the healing of his spinal injuries. "Our caregivers at Vanderbilt were amazing, but we quickly learned that there were no rehabilitation services for children his age in the state of Tennessee," said Kee. Facilities in Chicago and Atlanta were considered, but eventually the family discovered Ranken Jordan Pediatric Bridge Hospital in Missouri. "We are originally from Missouri," said Kee. "This was an answered prayer." Camden was moved to the facility with Kee by his side where he participated in intense rehabilitation, therapies, and school work for seven weeks.

Camden has been home for a little over a week now and is still trying to cope with the magnitude of everything that has happened. Kee said her husband carried Camden to his parents' grave site. He told his grandfather, "My heart feels like it is broken into a thousand pieces."

Still coping with her own grief over the loss of her daughter, Kee's main focus is to make sure that Camden receives the best possible physical and emotional care to complete his recovery now that he is back in Tennessee. A special component of that was coordinating a reunion for Camden with the first responders and caregivers he has encountered throughout his journey. Representatives from Murfreesboro Fire Rescue Department, the Tennessee Highway Patrol, Rutherford County Emergency Medical Services, Monroe Carell Jr. Children's Hospital at Vanderbilt, and Ranken Jordan plan to attend the benefit. According to Jennifer Wetzel, Media Relations Director with Vanderbilt University Medical Center, LifeFlight has arranged a "fly-in" for the event.

Kee is particularly thankful for one of Murfreesboro Fire Rescue's own, Firefighter Greg Burt. She credits him for removing Camden from the vehicle in a professional and skillful manner and keeping him stabilized. "Doctors told me if he had been moved differently, it could have caused fatal injuries or paralysis," she said. "I'm very grateful for the care he gave." Burt also visited Camden at Vanderbilt the two days following the accident and even brought his service dog which Camden remembers fondly. Kee remarked, "Camden still talks about 'Gauge' putting his paws on the bed and being able to pet him."

The appreciation does not stop there. "We have been blessed by so many wonderful people throughout this tragedy," she said. Several of the responders and caregivers have kept in contact with the family to receive updates on Camden's progress. "I know Camden has a long way to go, but I'm so thankful that it was in God's plan for his life to be spared, and how wonderful it is that the he will be able to see the very people that saved him face-to-face again!"