Another First For WGNS

WGNS was proudly the first AM radio station in the United States to begin this expanded FM translator service to our community. The station began FM coverage at 9:00 o’clock Thursday morning, March 1, 2007. Now, in addition to hearing the Good Neighbor Station at AM 1450, you can now listen on FM 100.5 and FM 101.9. Of course, our over-the-air TV channel 11 coverage will continue.

Ironically, one of the main reasons WGNS sought approval to retransmit on FM 100.5 and FM 101.9 was to give reliable, static-free 24/7 communications to Rutherford County residents during natural or man-made emergencies. Within hours of turning the two FM channels on-the-air,  tornado warnings were issued forcing Rutherford County Schools to announce that they were closing two-hours early. 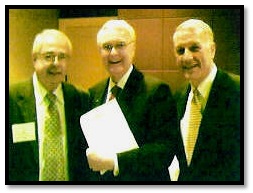 Bart was with a group of Tennessessee Association of Broadcasters at a national gathering in Washington when he learned that the Federal Communications Commission had granted special approval for WGNS to use two FM translators.

(Left Photo: L-R)  FCC Senior Deputy Bureau Chief Roy Stewart presents Bart Walker the waiver that allows WGNS to use FM. Also at the meeting in Washington, DC was Kingsport broadcaster and past National Association of Broadcasters AM on FM Chair George DeVault.

Approval Took Over A Decade

Walker said, "This waiver didn’t just fall out of the sky. We’ve been working on it, making written requests along with in-person presentations to the FCC for over a decade."

"It could not have been accomplished without FCC Commissioner Deborah Taylor Tate and U.S. Congressman Bart Gordon. Changes being considered by the Commission will have a major positive impact on AM broadcasters and the citizens who live in areas served by these radio stations."

Both Tate and Gordon grew-up in Murfreesboro, and are products of this city's public education system.

Being A Pioneer Brings Responsibilities

Anytime you're first, certain responsibilities and challenges follow. The station's two FM translator frequencies were approved on a temporary authority, officially called STA (Special Temporary Authority). WGNS would have to request renewal of these STA's every six-months. For the following couple of years, the Commission approved a limited number of other STA's across the nation. They monitored public response closely to make certain there was no interference created to licensed full-power FM broadcasters.

Thanks to Commissioner Tate and Congressman Gordon, Murfreesboro residents had a static-free source of emergency information. WGNS is grateful for their support that strengthened our request to the FCC.

U.S. Congressman Bart Gordon welcomed Lee Ann and Bart Walker to his Washington, DC office where he congratulates them on being granted approval to place WGNS on two FM frequencies.

WGNS Paved Way For Other AM Broadcasters

The FCC wanted to make certain that allowing AM broadcasters to use FM translators was indeed a positive service to the pubic that did not cause interference to existing FM licensees. For the next several years, WGNS and a handful of other AM stations, were a part of "real world" tests.

The FCC had several instances in which the public could issue their thoughts "for" or "against" the proposal. After a couple of years testing the use of FM translators by AM broadcasters, the Commission determined that there was no interference to existing FM stations. The Federal Communications Commission determined that indeed the public benefited from allowing AM licenses (medium wave broadcasters) to use FM translators to "fill in" their service area.

On May 1, 2009, the FCC formally approved the plan and gave licenses to the AM broadcasters to "fill in" their city grade signal area with FM translators.

This was another first for the Good Neighbor Station. WGNS became Rutherford County's first radio station when it signed-on the air at 10:00 o'clock Tuesday night, December 31, 1946 to ring-in the New Year of 1947. WGNS was also the first station here to go AM stereo with the C-Quam Motorola system in 1984. Another first that year was to offer Rutherford County around the clock 24/7 programming.