Who is Tennessee for when it comes to presidential candidates? 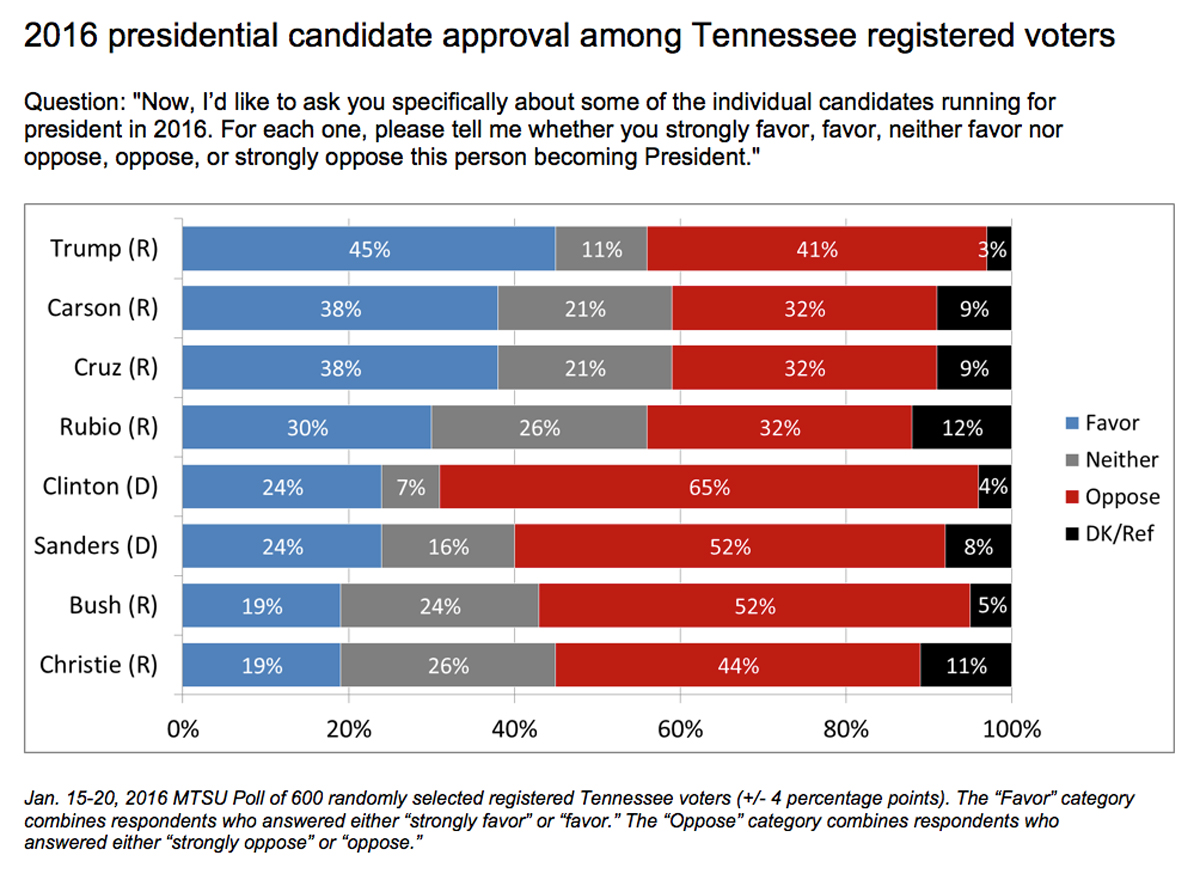 Tennessee's Republican primary is down to a race between Donald Trump and Ted Cruz, with Trump holding an advantage but with many party voters still undecided, the latest MTSU Poll shows.

On the Democratic side, Hillary Clinton leads Bernie Sanders, but her statewide disapproval ratings are the highest of any top candidate on either ticket.

"We asked two types of questions about the presidential race to get a sense of where potential voters stand," said Dr. Jason Reineke, associate director of the poll at Middle Tennessee State University.

"First, we asked registered voters to name, off the tops of their heads, the one candidate they would most like to see win the election and the one candidate they would least like to see win the election. Second, we asked whether they would favor or oppose each of several specific, current candidates running. We then broke the results down for the self-described Democrats, independents, and Republicans who responded to our poll."

The poll of 600 registered Tennessee voters was conducted Jan. 15-20 and has a margin of error of 4 percentage points. Voters in Tennessee and 10 other states will go to the polls March 1 in the so-called "SEC primary."

When asked to name the one person they would most like to win the 2016 presidential election, 33 percent of self-described Republican voters named Trump. Cruz came in second, chosen by a significantly smaller 17 percent of Republicans.

But 28 percent of GOP voters said they did not know who they would like to see win.

Ben Carson, who led the presidential field among Tennessee voters in the October 2015 MTSU Poll, drew just 7 percent of Republican voters in the latest sample. The remaining Republican candidates also registered in the single digits at best.

Trump also posted the best numbers among self-described independent voters, with 26 percent naming Trump as the candidate they'd most like to see win. Democrat Sanders, the next-most-popular candidate, came it at a significantly lower 10 percent.

But 30 percent of independents were undecided, and the rest chose candidates who pulled in only single-digit percentages.

The news wasn't all good for Trump, though. About a quarter of Tennessee voters - the biggest chunk of them Democrats - singled him out as the candidate they'd least like to see win the presidency, far more opposition than any other Republican candidate attracted.

But 47 percent of self-described Democratic voters in the sample picked Clinton as the candidate they'd most like to see win the presidency. A significantly smaller 15 percent named Sanders, and 26 percent said they did not know. All other percentages were in the single digits.

'Favorability' and the Republicans' 'deep bench'

Dr. Ken Blake, director of the MTSU Poll, said that even with the subsample's larger error margin taken into consideration, the findings suggest a majority of state Republican voters would favor either Trump, Carson or Cruz.

"The Republicans have what you might call a 'deep bench' of presidential candidates in Tennessee," Blake said. "If the current favorite, Trump, were to fade, it appears majorities of GOP voters would be willing to back Cruz or Carson, perhaps especially if Clinton turned out to be the Democratic nominee."

Among Democratic voters, only 42 percent would strongly favor, or favor, Sanders becoming president, statistically much less than the 77 percent who would support Clinton as president.