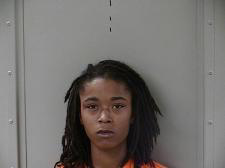 A 22 year old college student has been charged with aggravated assault after a stabbing was reported in Murfreesboro. Tashley Shanice Harber was detained for questioning and later arrested after she reportedly got into an altercation with another subject at The Vie Apartments on Wenlon Drive.

The female victim in the case was transported to St. Thomas Rutherford Hospital, where police met her. The suspect was taken to the Rutherford County Adult Detention Center and placed under a $10,000 bond. She was held an hour and 55 minutes before making bond.