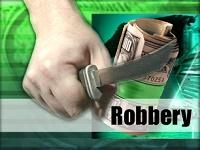 A 30-year old North Tennessee Boulevard woman was robbed at knifepoint outside the Dollar General Store on West Northfield Boulevard. Murfreesboro Police Officer Derrick Bush reports the woman was on her way back from making a deposit at the nearby SunTrust Bank Saturday night just before 9 when she had a knife pressed to her back. The suspect told her to drop her purse and not to turn around because he knew where she lived. After she dropped the purse, she saw the suspect run away. He's described as a black male with long dreads and wearing a red shirt. The suspect got away with her purse, wallet, debit cards, a driver license and cash deposits of six-hundred dollars.