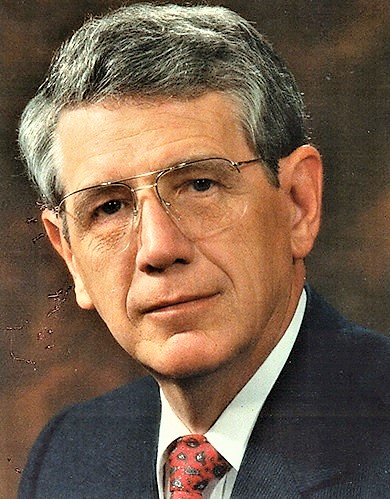 If you have been involved in the jewelry business, or a member of the Lions Club--the name Austin Peay Jennings rings a bell. This community leader and native of neighboring Woodbury, reached over the miles and had a positive impact on residents in Murfreesboro, Nashville and through Lions--the world. At the age of 91, he passed away peacefully at his home on July 7, 2018.

After graduating from Woodbury Central High School in 1944, Austin joined the Army Air Corps as an aviation cadet. Before leaving for basic training, he married his high school sweetheart, Carmine Scott. They were a match made in heaven as Carmine's calm gentleness balanced well with Austin's ambitious drive.

His leadership skills blossomed in everything he did. An example being Lions Club International. He joined the Woodbury Lions in 1949. It didn't take long for members throughout the district to take notice and he became Zone Chairman and later District Governor.

Fellow Woodbury native Dr. Walter Campbell urged Austin to seek greater participation in Lionism on a global scale. He was elected to the office of International Director 1976-78 and as International President of Lions Clubs in 1988-89.

Austin was instrumental in establishing the Lions SightFirst program which has helped restore sight to thirty million people around the world. He was a vocal proponent of Lions Kid Sight, a national program that annually screens over a million preschool and school-aged children for vision problems. Austin has been a major supporter and fundraiser for the Tennessee Lions Eye Center at Vanderbilt Eye Institute, the regional center for pediatric ophthalmology services, and served on the Board of Directors for the Vanderbilt Children's Hospital.

With the Lions, he followed in his father's footsteps: Austin's dad, Selmer, was a founding member of the Woodbury Lions Club.

Perhaps it was his first job of folding the weekly newspapers at the Cannon Courier as a child that sparked his love for mass media.

He learned all aspects of the newspaper and printing business under the guidance of editor and publisher Hayden Smith.

In fact, upon returning home after the war, Austin was rehired at the Cannon Courier. He became editor and publisher and, in 1951, the owner.

Austin's love for the newspaper business never ceased, and he bought the Livingston (TN) Enterprise with a managing partner in 1960. He acquired two additional weekly newspapers also managed by partners. He continued in a long and valued partnership with Betty and Bill Bowden, publisher and editor of the Fentress Courier, Jamestown, TN.

He had the desire to start a different form of media. Austin formed a partnership and on October 24, 1963, he started Woodbury and Cannon County's first radio station--WBFJ (now WBRY).

After selling the Cannon Courier, Austin purchased the local jewelry store from Roy Fuston in 1952. With no prior training or experience in the retail jewelry trade, he quickly honed his natural talents in marketing, eventually acquiring or starting five additional jewelry stores in Middle Tennessee.

He played a leading role in founding and organizing the Tennessee Jewelers Association. Austin ran a photography business in the back of Jennings Jewelers store in Woodbury. In addition to thousands of portraits, weddings, and senior class pictures, he photographed many important events in and around Cannon County.

He loved everything about his hometown, and you could tell that by the fact that he and his late wife, Carmine, helped organize and lead the Cannon County Historical Society which is dedicated to the preservation of his home county's heritage and documentation of its notable citizens. With Carmine, he compiled and edited Cannon County, Tennessee, A Pictorial History and contributed significantly to many other publications of the Society.

Austin and Carmine served their community in many capacities. Austin organized the founding of the Adams Memorial Library in 1964 to honor his mentor and friend, Dr. J. F. and Laura Adams. He was president of the board of directors of the Adams Memorial Association for over fifty years and headed two major capital fundraising campaigns to support and expand the library.

He served on the Board of Directors for the Bank of Commerce over twenty years.

After retiring from business, Austin and Carmine enjoyed spending most winters at their condo in Florida. They continued to travel extensively for Lions activities and to visit their many friends around the globe.

One of Austin and Carmine's favorite pastimes was their work to create a Jennings Family History book for which they researched and added ancestral pictorial and personal stories and histories for many years.

When asked, "Have you lived in Woodbury all your life?" Austin's favorite quip was, "Not yet!" He was a leader on a world stage, but he never forgot his roots and the family and friends who supported his quests.

Austin was a member and Sunday school teacher at First Baptist Church in Woodbury.

At Austin's requests, a simple graveside service will be held at Riverside Cemetery at 6:00 o'clock Saturday evening, July 14th. Smith Funeral Home is in charge of arrangements. The public is invited.

His life will also be celebrated a month and a half later, from 3:00 to 7:00 on Saturday afternoon, August 25th at Woodbury First Baptist Church in Madden Hall. The family invites friends and community to come reminisce and honor his remarkable legacy.

As Austin wished, in lieu of flowers, gifts and donations can be given in his memory to:

The family is grateful for the team of dedicated caregivers who have been with Austin these past two years: Yvonne Curtis, Rachel Melton, Kelly Dodson, Amy Taylor, Angela Emberton, Ashley Emberton, Audrey Lockwood, Kyla Lance, Katelyn Kilgore, and Miranda Stacey; and the nurses and aids at Adoration Health and Caris Healthcare. A special thank you goes to Joann Tate, owner of Jennings Jewelers and invaluable friend who has helped him for 40 years. Our gratitude also goes to the many other friends and family who have been supportive and helpful in this time of sorrow.

Smith Funeral Home in Woodbury is in charge of the arrangements.