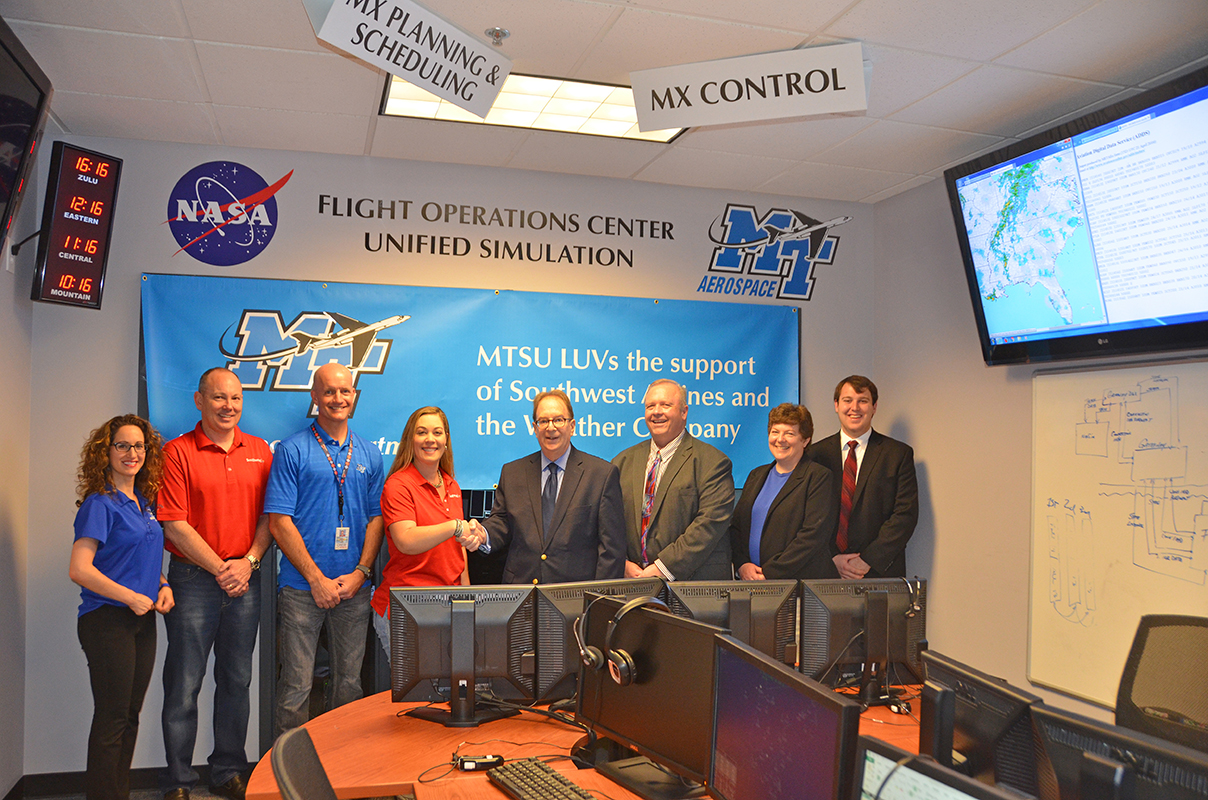 MTSU will be the first educational institution to have access to this product and students will graduate with a competitive advantage not offered at other aviation schools, officials said.

The College of Basic and Applied Sciences' aerospace department secured the donation of WSI Fusion from The Weather Company, an IBM Business, through an ongoing partnership with Southwest Airlines.

Southwest Airlines is a sponsor of MTSU's NASA Flight Operations Center-Unified Simulation Lab (FOCUS), which trains students in real-life scenarios, and provides a unique opportunity for seniors to learn how to work as a team to safely and efficiently run a virtual airline. Weather plays a critical role in aviation, and this state-of-the-art software (also used by Southwest Airlines) will prepare and equip MTSU students for their future careers in aviation.

WSI Fusion is an advanced, proactive flight monitoring application that fuses public and proprietary weather information with real-time flight and airspace data into one common view, and facilitates timely communication directly with aircrafts. This allows users to leverage big-data and feel more confident about operational decision-making.

In the midst of an aerospace career fair Thursday (April 21) in the Business and Aerospace Building's first-floor south lobby, MTSU officials took time to say thank-you to their industry partners.

"This is an amazing opportunity for our students to gain familiarity with airline weather and dispatching software," said associate professor Andrea Georgiou, who helped the department secure the product. "MTSU aerospace students will have a major advantage over other college applicants when applying to the airlines."

"Students can put this on their cover letters and resumes that they've had this training," Georgiou added.

Provost Brad Bartel called it a coup for Georgiou (pronounced GEORGE-O), the department and the students who will benefit from the advanced technology.

"We already feature one of the top aerospace programs in the country," Bartel said. "This weather software donation will take our students to another level in terms of career advances and opportunities. They already will be trained in the industry's most sophisticated software."

"Exposure to this product during their capstone experience will be a significant advantage to all aerospace students as they begin their professional careers," interim aerospace chair Wendy Beckman said.

"Our flight dispatch students in particular will benefit from familiarity with the software package as they apply for jobs," she added. "We are very appreciative of Southwest Airlines and The Weather Company for allowing our students this opportunity."

MTSU alumni with ties to Southwest attending included Capt. Ken Hamilton (Class of 1992, '93), Larry Schadle (Class of '92, '93) and Whitney Dix (Class of 1999), all of whom helped secure the gift and have roles with the MTSU-Southwest relationship.

Dix became the first MTSU student to graduate with a degree in the flight dispatch concentration. Hamilton was MTSU's first flight school student to fly.

Georgiou helped arrange the donation. She attended a five-week dispatch training session offered by Southwest in 2015. Establishing a rapport with Southwest officials, Georgiou invited them to visit MTSU's facilities.

"They came and saw the FOCUS lab and were really impressed with it," she said. "They saw a platform (with weather) and wanted to improve the lab."

The NASA FOCUS Lab stemmed from a 2010 grant obtained by professor Paul Craig.

As part of the lab, students from all six aerospace concentrations must work together to solve issues as they arise during their shift. To ensure the highest level of realism, aerospace and psychology faculty and graduate and undergraduate students monitor the simulations, implement real-world problems and disruptions, and conduct debriefings.

Georgiou and senior Evan Lester, who will graduate in May and return as a graduate student, will visit Southwest Airlines in early June for software training. The Weather Company and Southwest officials will return to campus later to view the product in use. Lester oversees the NASA FOCUS Lab.

MTSU senior aerospace major Evan Lester calls up The Weather Company's WSI Fusion software that students will begin utilizing in the fall. Lester, who graduates in May, will return as a graduate student and continue overseeing the NASA FOCUS Lab. (MTSU photo by Randy Weiler) 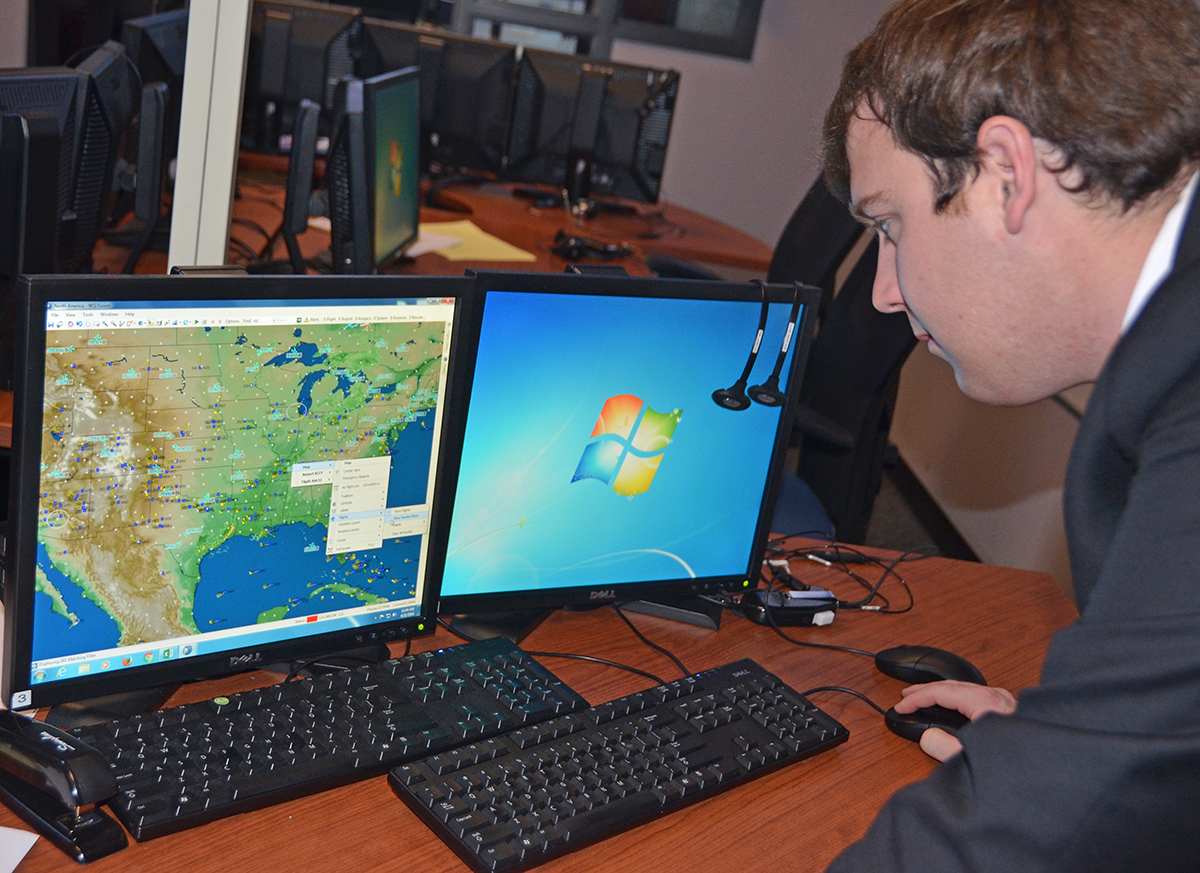