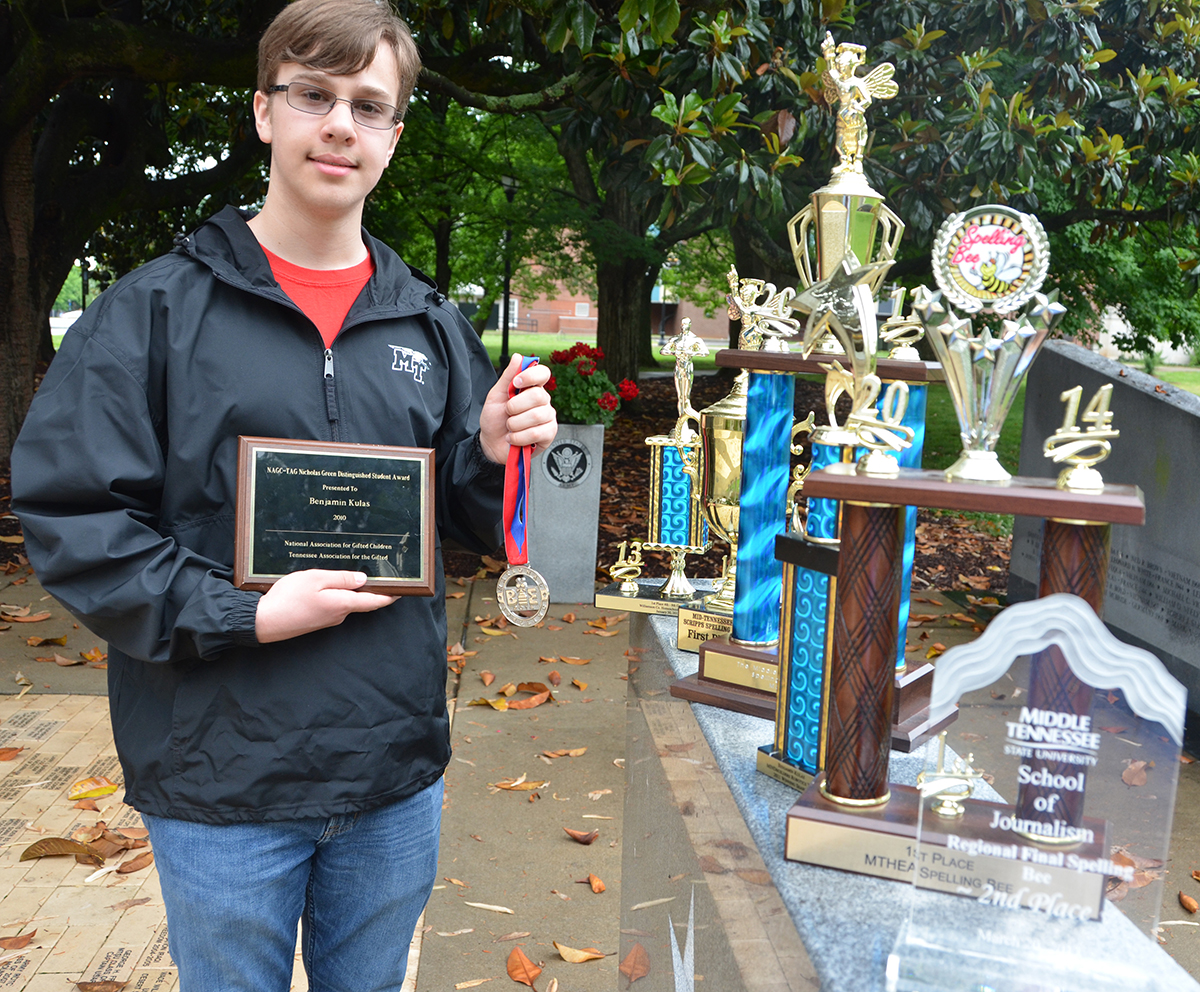 Including a second-place award from the MTSU School of Journalism regional spelling bee, sophomore Benjamin Kulas is shown with a variety of honors he has earned in recent years. He helped make a welcome speech to nearly 300 youngsters competing in the Scripps National Spelling Bee May 23 outside of Washington, D.C. (MTSU photo by Randy Weiler)

MTSU's youngest student has been invited to help make a welcoming speech at this year's Scripps National Spelling Bee in National Harbor, Maryland, near Washington, D.C.

Benjamin Kulas, 15, a sophomore physics major from Murfreesboro who advanced to the 2014 national semifinals and was eliminated in the 2011 preliminary round, received an invitation from director Paige Kimble to speak after she and a colleague heard him speak at the Tennessee Titans Regional Spelling Bee in March.

Kulas and another past participant will take turns reading a script, written by officials with the National Spelling Bee, during the 6 p.m. May 23 welcome event in the Maryland Ballroom of the Gaylord National Resort and Convention Center in National Harbor, Maryland.

This year, 285 spellers -- 144 boys and 141 girls -- from across the U.S. and other countries will compete for the title of National Spelling Bee champion. The purpose of the bee is to help students improve their spelling, increase their vocabularies, learn concepts and develop correct English usage to help them all their lives. ESPN networks will air spelling bee preliminary and final rounds live.

"Oh, not very long," Kulas said when asked how long it took to accept Kimble's offer. "... About as long as it took to write an email reply."

"I'm honored," Kulas added. "I didn't really expect it, but I'm very happy about it. ... It's mainly intended for the spellers and it gives me a chance to go back to the bee if only for a day. It will be a reunion as well as a speaking opportunity."

Kulas calls the National Spelling Bee "a test of might and a test of knowledge and endurance, and you happen to be doing it with other people."

"It is very tough," Kulas said of the national competition. "There's a lot of studying for serious spellers. The ones who truly want to win are very dedicated. Some study as much as eight hours a day."

Kulas, whose parents Diana and Jeff Kulas moved to Murfreesboro near MTSU so their son could be close to campus, entered MTSU at age 14 as a Buchanan Fellow -- selected by the Honors College to receive one of 20 full scholarships provided by money given to the university by the late James M. Buchanan, the Nobel Prize-winning alumnus.

He said his freshman year had been "stressful at times, but, overall, a great experience."

"The Buchanan Fellowship helped me make a great group of friends," he added. "The social aspect doesn't come easily to me, but it was not as hard as I expected. I have a 4.0 right now, but that can change. ... Spring semester was touch and go (academically). Probably the hardest part has been the writing. I have not had the chance to do thorough, serious writing until college."

Not lost in his memory bank were the 19 papers he wrote this spring in his 15-hour course load. Most were in an introduction to philosophy class, one he took with other Buchanan scholars, and a foreign literature and translation class.

While four or more years younger than his peers, he felt he fit in with classmates.

"My friends all tend to be a little older than I am," said Kulas, who is minoring in computer science and mathematics. "They don't tease me, but they will make a joke sometimes. Plenty of faculty and other students think I'm a younger-looking 17- or 18-year-old."

In physics, Kulas earned year-end recognition for being the first-year student showing the most promise, a physics alumni scholarship and elected Society of Physics Students treasurer for 2016-17. He is among the Honors College students assisting senior citizens with technology problems at Adams Place.