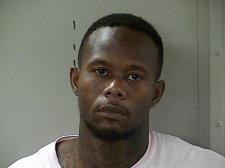 A man who made what police described as an improper lane change was pulled over in Murfreesboro on Mercury Boulevard around 10:00 at night. Once stopped, police say the odor of marijuana was coming from the car.

Derrick Boney, who just celebrated his 34th birthday, was asked to exit the vehicle. After getting out of the car the arresting officer asked for consent to search Boney. When granted the go-ahead the officer wrote in his report, "I felt a foreign object believed to be a bag in his rectum area." After locating the item Boney allegedly refused to remove it.

Moving on and leaving the bag alone, police found a large amount of cash in the center console of the car that Boney was driving. A small white rock that tested positive for crack cocaine was then found in the cup holder of the car. More cash was then located in Boney's pocket.

Due to police believing that Boney had something illegal down the rear of his pants, officers decided to detain him. The man was transported to the local jail and while on route, the Murfreesboro Officer noted that the smell of marijuana started to fill his patrol car. After the man was escorted into the Rutherford County booking department at the local jail, police found a bag of weed on the floorboard of the patrol car. Also in the car where Boney was seated was a bag of what looked to be crack cocaine.

Boney, who is currently on parole with four prior drug convictions, was charged with the felony possession of all narcotics found by police both in the patrol car and allegedly on his person. Two phones that the man admitted to owning were also seized by police as evidence.

The official police report shows that the man confirmed that he is a member of the 8-Trey Gangsta Crip gang. As for the drugs, they are being sent to the TBI Crime Lab to be further tested.