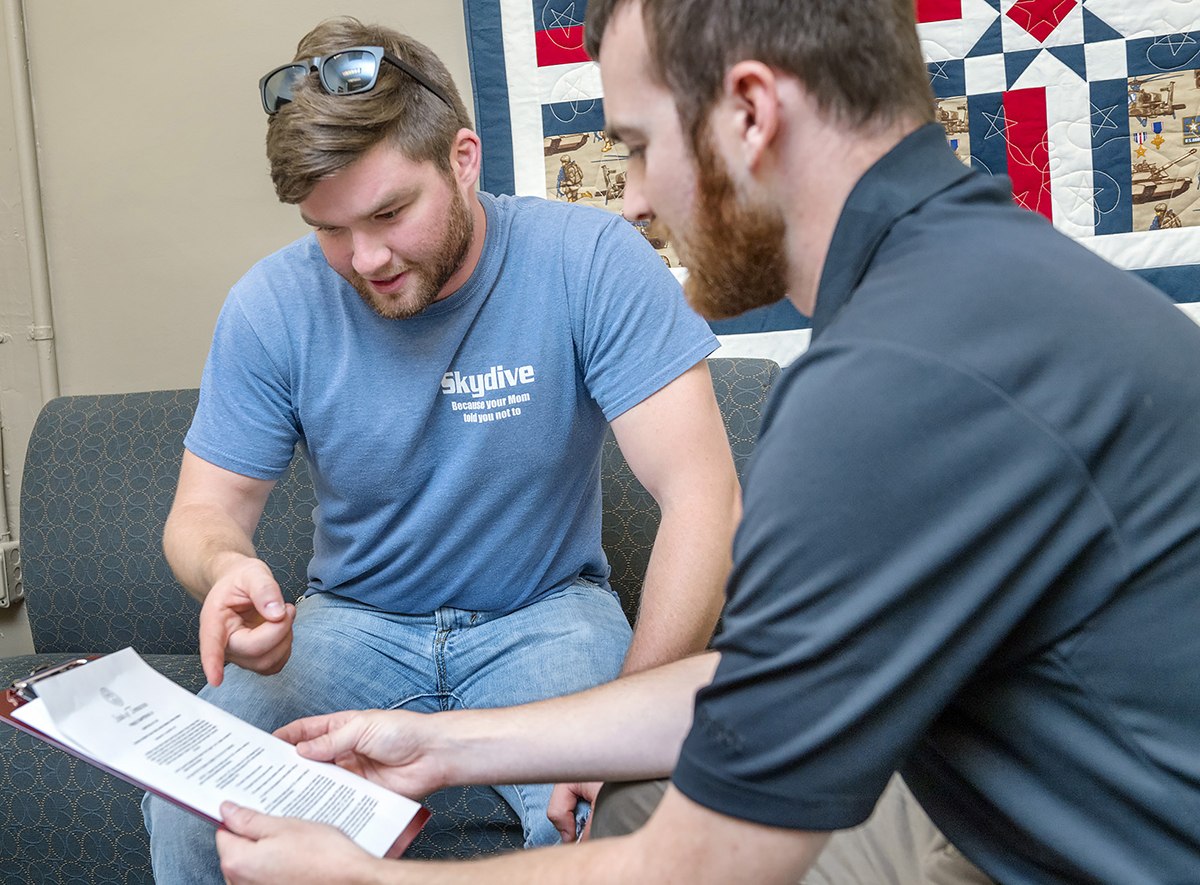 MTSU student veteran Kevin Hicks, left, and Daniels Veterans Center staff member Sean Martin review a copy of an amended bill passed by members of the Tennessee State Senate to eliminate out-of-state tuition for vets and others who are eligible and living in the state. (MTSU photo by J. Intintoli)

MTSU student veteran Kevin Hicks saved more than $13,000 in out-of-state tuition and felt like he won the lottery.

Thanks to an amended Tennessee General Assembly regulation relative to education for veterans, service members and other eligible individuals, the change will save student veterans thousands of dollars in the future after they establish in-state residence.

The change affects those enrolled at any public college or university in Tennessee, those using Veterans Affairs benefits where they attend college and those now living in Tennessee after previously residing in another state.

It saved Hicks, who moved to Murfreesboro from Birmingham, Alabama, $13,168 -- and he was over-the-top happy to take care of a $10 international (study abroad) student fee all students must pay.

It all started when Hicks, 26, an aerospace professional pilot major, was in the Charlie and Hazel Daniels Veterans and Military Family Center, and happened to overhear a conversation Sean Martin, transition manager in the Veterans Transition Home Office, was having with staff member Teana Harle earlier this year.

Martin told Hicks the center had just learned about the change.

"You work hard for your country. Keeping money in our pockets -- that's good," Hicks said. "It's helping to pay for my flight school."

How did Hicks plan to pay for college had the out-of-state tuition opportunity not opened?

"Hitting up all my family members and begging them for money," he said. "I have a lot of friends barely making it and just holding on."

Hicks works as a skydiving instructor in Chattanooga, Tennessee, every weekend and did so this past summer as well.

"(With the tuition taken care of), my rent is covered as are my utilities and all my bills," said Hicks, who was a communications specialist working with high frequency communications in the U.S. Army.

For Martin and the center, "we're no longer in the business of trying to declare in-state residency. We don't know how many people this could impact or that it could've impacted."

"This has not only helped out single veterans, but it's also going to help out married veterans who are coming back to the state and their children and spouses who are using their education benefits at MTSU," he added. "About one-fifth of those I have processed under the law fall under the category of a spouse or child."

To learn more about the veterans center on the first floor of the Keathley University Center and its offerings, visit http://www.mtsu.edu/military/index.php or call 615-904-8347.