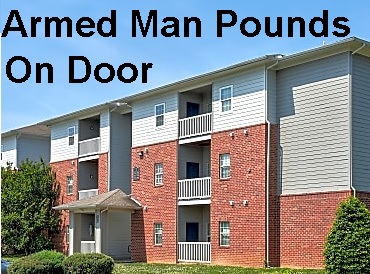 (MURFREESBORO) Murfreesboro Police rushed to a Wenlon Drive apartment after receiving reports that an armed man was pounding on the door.

It appears that the male had reportedly been with a woman who lives at the apartment. That man later spoke with police on the phone and was asked about a pistol that apartment residents said he was carrying while pounding on the door. He told the officer that he had a "carry permit".

After that, the phone conversation with police ended abrubtly when the line went dead.

According to the police report, the woman who answered the door described the pistol, "It did not look like a normal handgun, because it was bigger."

After the phone conversation, Officer Rice then checked social media and discovered that the man at the door had gone LIVE on FaceBook. The video captured the verbal threats as well as showed what is described in the police report as being "a black handgun that appeared to have an extended magazine with a silencer attached to the barrell as well."

He told officers that he was there merely to get his belongings.

In the Murfreesboro Police report, Officers Roche and Rice stated, "Due to Mr. Sportez Currie being armed while making threats to shoot all four occupants of that apartment (one being his ex-girlfiriend), threatening to shoot Mr. Perteet if he called the police, and threatening to shoot Ms. Leonard if she did not him him her phone", they obtained the warrants charging 22-year old Sportez Currie of Memphis with 3 counts of aggravated assult, 1 count of aggravated domestic assault, 2 counts of prevention of 911 were obtained.

The incident occured around 9:00 o'clock Friday morning, March 22, 2019. At 5:19 that afternoon, Murfreesboro Police responded to a domestic call to Chipolte Restaurant at 479 N. Thompson Lane. Upon arrival, Sergeant Alden had contact with Sportez L. Currie. He was arrested on all charges and booked at the Rutherford County Adult Detention Center.

Currie will appear in General Sessions Court at 8:00 o'clock Thursday morning, May 2, 2019.