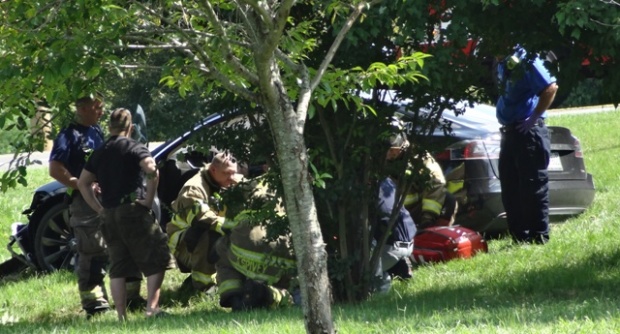 We have more news on the Tesla motorcar that wrecked on Thompson Lane Wednesday afternoon around 3. Murfreesboro Police have confirmed the woman driving the vehicle was charged with her first offense of DUI (Driving while Under the Influence). The 34-year old woman was also charged with Violation of Implied Consent when she reportedly refused to a blood alcohol test.

What makes this story unique is the all electric car she was driving. The all electric four door Tesla she was operating was reportedly the only one of its kind in Rutherford County, TN. It is a luxury electric car that is sold for $70,000 to $120,000 depending on the model.

A Murfreesboro Police arrest report states that officers arrived at the scene of the crash and witnessed the utility pole was down. The car was about 100-feet away from the pole. When police talked to the female about what caused the wreck she evidently told officers, "she was messing with the radio.” When Officer Martin asked for the suspects drivers license, she reportedly handed it to a fireman standing next to him, according to the report, instead of him.

The woman was taken to StoneCrest Medical Center in Smyrna and later released to police custody. At that point she was booked into the local jail under a $2,000 bond.

About the Tesla Vehicle She was Allegedly Driving:

The vehicle in this crash was probably the only one of its kind in Murfreesboro and possibly in the state. It was a current 2012 Tesla Model S, all electric vehicle. The young female driver possibly survived because this car has a 5-star safety rating for front, side or rollover crashes. In checking the Tesla website, they note the high-strength steel and aluminum frame contribute to its crash performance. It appeared that possibly all 8 airbags had opened, plus this is not a lightweight car--it weighs a little less than 5,000 pounds. The car, depending on the accessories, is sold for $70,000 to $120,000.

Before police could release the electric vehicle to be loaded onto the flatbed wrecker, they had to secure information on how to turn off the Tesla Model S. Officials received technical instructions, and the all electric 4-door car was shut down.

Using the computer controlled SCADA (Supervisory Control And Data Acquisition) system, Murfreesboro Electric was able to divert power sources and return electricity to most residents in the area within a short period of time.