Posting Pictures of Mugshots Gathered from the Sheriff's Dept. App May Not Be a Good Idea 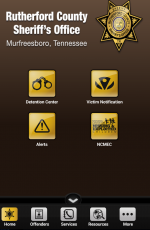 The Rutherford County Sheriff’s Office App is a great resource to find out who has been arrested, but there are some things you can do with the App that may not be in the users best interest. For example, when you open a mug shot there is a direct link in the top right hand corner that allows you to post the mug shot to your FaceBook page.

A Murfreesboro woman called the police to report that she was allegedly being harassed by at least one person whose picture she posted on FaceBook. Evidently, the 19-year old female routinely post pictures of those arrested on her FaceBook page. The recently arrested suspect supposedly messaged the victim on FaceBook and told her, “The only reason she’s still standing is because of her child.”

The woman has since blocked the suspect from contacting her on FaceBook. No arrest has been made.