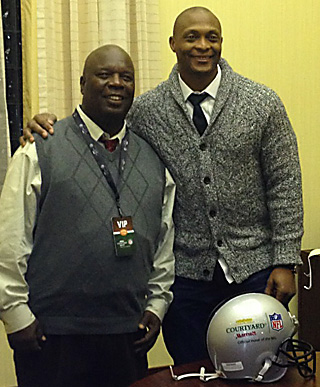 Murfreesboro Football League coach Kenneth Clark was recently recognized by Courtyard by Marriott/USA Football for someone who 'Inspires Greatness in Others'.

Clark is one of ten across the country to receive the honor and one of seven from selected markets to be special guest at a Courtyard Tailgate party before a Thursday night NFL football game.  He was nominated by Murfreesboro Parks and Recreation Athletic Coordinator Gary Arbit.

"USA Football sent out information to nominate a person that was either a coach, parent, referee or volunteer in your football program that we felt like was an inspiration to others," said Arbit. "That was Coach (Kenneth) Clark in every way.

"He has been in our program for over thirty-five years and is one who is constantly giving back. Year after year, win or lose he is always very positive. He always has the best interest in his players from teaching them the basics of the game to being a good person and good citizen."

Clark received a commemorative helmet and a $1,000 equipment donation to the Murfreesboro Football League program from Courtyard.

"Coach Clark has given a great deal back to the community and our program," added Arbit. "Never thinking about himself, always about the youth involved in our program weather they are on his team or another. He is very deserving of the honor and that is why we nominated him."

"Gary (Arbit) told me that he had nominated me but I actually forgot about it," said Clark. "Then I found out that I was selected and it was like wow!  What an honor. There are a lot of people across the country that are deserving. I am very honored to have won."

"And then the reception before the game on Thursday. There was around two hundred people there," said Clark. "It was really a big deal and then getting the $1,000 check for the use in the football program was a bonus. All this has been really something. This program gave me a lot when I played in the league. I am so happy that I can give back to it.  I am humbled and very honored to be selected."