UPDATE: Rutherford County Sheriff Deputy who was in YouTube Video, A.J. Ross, is Deputy of the Year 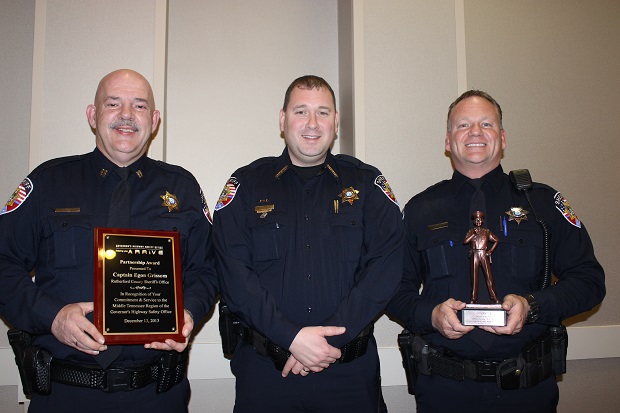 Correction: The Tennessee Governor’s Highway Safety Office has chosen Rutherford County Sheriff’s Department Deputy A.J. Ross as their “Deputy of the Year.” You may recall Ross is the deputy who became a YouTube sensation after a motorist refused to roll his window down during a sobriety checkpoint earlier this year (July of 2013).

Channel 4 News reported in July (2013) that Ross actually worked at the sheriff's department twice, the first time being hired in 2002 by Sheriff Truman Jones. Then, former Sheriff Truman Jones accepted his resignation after Ross, according to his personnel file uncovered by WSMV, lied to Murfreesboro Police about having insurance after a fender bender accident. Ross was later re-hired under the new administration.

The man who filmed the YouTube video notified the Sheriff’s Office that he did not wish to file a complaint against Deputy Ross. Sheriff Arnold further stated, “He did his job.” The video has had over 4.3-million views.

Below - The following information is a press release from the Rutherford County Sheriff's Office highlighting the Deputy of the Year as suggested by the Governor's Highway Safety Office:

"He is Deputy of the Year because he’s passionate about teaching, driving many miles and doing it without big pay,” Burnett said.

Sheriff’s Lt. Joe Gray, who nominated Deputy Ross, said he is a key player in the Traffic Unit who shares his skills with deputies and other law enforcement officers in Tennessee and the U.S.

He has taught numerous classes for the Sheriff’s Office and for the Governor’s Highway Safety Office in the field of DUI detection, standardized field sobriety testing and drug impairment detection.

“Deputy Ross is this department’s only DRE (drug recognition expert) and as such has performed numerous drug evaluations for this department and for surrounding agencies,” Lt. Gray said. “His knowledge and skills in this area also landed him an invitation to teach at the Tennessee Prosecutor’s Conference, whose members are the district attorney generals and their assistants from the various judicial districts across the state.”

He is also a frequent guest instructor at the Tennessee Law Enforcement Academy where he teaches Standardized Field Sobriety Testing to new law enforcement officers from across the state.

“Deputy Ross has performed brilliantly in his job as a traffic officer also,” Lt. Gray said. “His rate of conviction is near 100 percent and he has made the second highest number of arrests for impaired driving at this department for the past year. Deputy Ross also never hesitates to assist other deputies or officers with other agencies with their arrests and stops.

He volunteers his time on numerous occasions to speak on traffic and DUI related matters. Some of the groups he has addressed include the Sheriff’s Citizen Academy, Stones River Chapter of Concerned Bikers of Tennessee, Boy Scouts of America Explorers Post and several other groups and organizations.