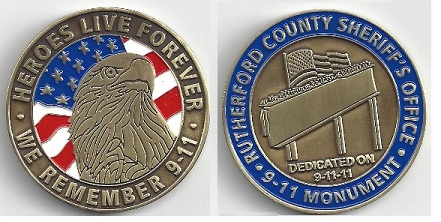 Challenge coins depicting the World Trade Center artifact on display at the Rutherford County Sheriff’s Office are on sale with the proceeds used to fund a permanent memorial.

The artifact was mounted and dedicated 9-11-11 on the 10th anniversary of the terrorist attack on the twin World Trade Centers in New York City. The artifact will be the centerpiece of a permanent memorial including a concrete platform with four flagpoles representing the U.S., Tennessee, military and 9-11 flags and four urns representing the four planes the terrorists crashed 9-11-01. Memorial bricks will surround the platform.

An antique-shaded bald eagle in front of the U.S. flag is depicted on the face of the coin, said Deputy Greg Dotson who is coordinating the monument construction for the sheriff’s office. “Heroes live forever” and “We remember 911” are etched around the front of the coin.

On the back is the 9-11 monument with the U.S. flag as the background inscribed with the dedication date of 9-11-11 and the Rutherford County Sheriff’s Office.

“The numbered coins will be more of a collector’s item later in life,” Dotson said.

People who wish to purchase a coin may order through the Rutherford County Sheriff’s Office Facebook page, at the sheriff’s office at 940 New Salem Highway in Murfreesboro or by calling Dotson at 904-3033.

“The coins make great stocking stuffers,” Dotson said. “It’s beautiful. The primary reason for getting the coins is to continue fund-raising for the memorial. We hope to make enough to finish the project started last spring.”

Deputy Jim Noe said the challenge coins originated in the military and were given as a sign of appreciation or as recognition to ranking officers.

About 100 to 150 citizens touch the monument during the weekends.

“This coin could be a permanent reminder of the monument,” Dotson said. “It’s my belief that our grandchildren or great-grandchildren will cherish these coins as much as you will today.”