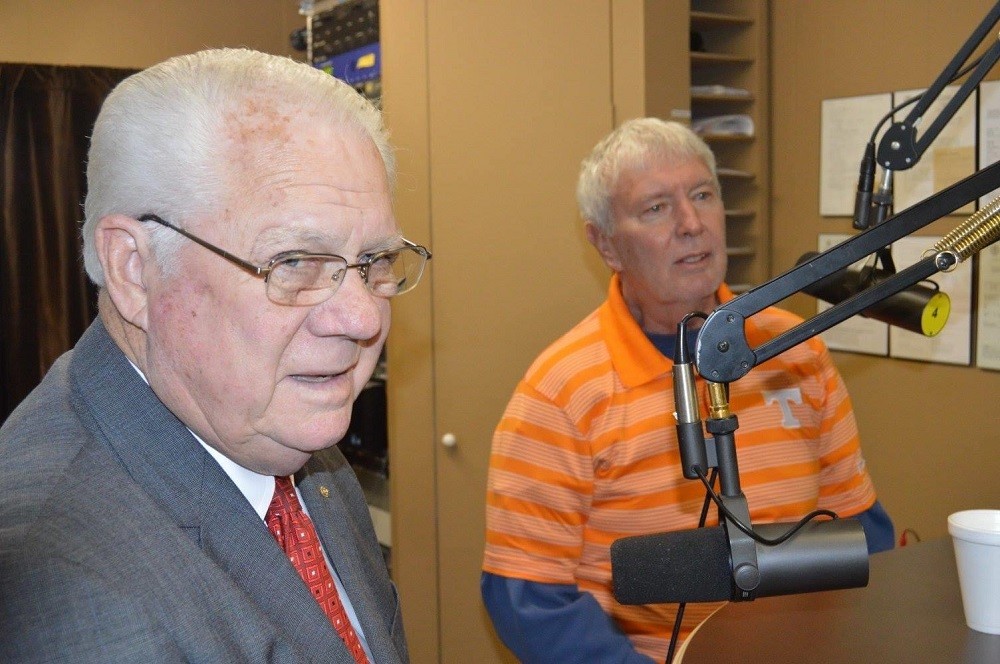 The city of Murfreesboro has lost a great friend. John "Bubba" Woodfin passed away Saturday (July 4, 2020).

(Above PHOTO) Bubba Woodfin in the WGNS studio with Truman Jones in 2013.

He has comforted many families in their time of need for decades as president of Woodfin Memorial Chapel.

We will have more details as they become available. Please keep the family in your thoughts and prayers.

Below is an episode of the Truman Show with the late Dan Whittle co-hosting along with Bubba Woodfin from January 13th, 2016:

A Tribute To Bubba

John B. “Bubba” Woodfin loved America, and he passed away on this country’s most patriotic celebration--Independence Day. Ironically, that was just 15-days shy of his 86th birthday (born July 19, 1934).

He met the girl of his dreams, Kay Shannon, while they were both students at Middle Tennessee State College, now MTSU. Less than a year later, they were married and their romantic adventure was filled with happiness and helping others. In fact, they just celebrated their 61st anniversary a few weeks ago (June 13).

He was a student of history, especially local, and collected all sorts of Rutherford County memorabilia.

Bubba also enjoyed automobiles, and over the decades was a regular at driving dignitaries in area parades. When you rode with Bubba, he personally made you feel as if you were an honored guest.

In fact, he shared that mood everywhere and to anyone with whom he came in contact.

One of his favorite stories was about a 1956 light blue MG-A that he saw while serving in Germany.

He shipped it home and drove it for several years, but decided to sell the sports car when he married. Decades later a friend discovered that MG-A overgrown in an Eagleville fence row. The family jumped at the opportunity to restore it and surprise Bubba on his birthday.

He was speechless, and quipped, “I’m glad that car can’t talk.”

Bubba and Kay both experienced heart disease, and they became living role models to friends about the importance of living a healthier lifestyle.  In fact, they were the 2009 Heart Ball honorees.

On top of all that, he was an avid hunter and fisherman.

Bubba was a 63-year member of the Murfreesboro Rotary Club and numerous Paul Harris Fellow honoree.

He truly lived his life by Rotary’s 4-Way Test as well as its motto of “Service Above Self”.

A friend commented, “He was the one who worked quietly behind the scenes and got things done—never wanting to be in the limelight.”

Another described Bubba saying, “He gets his enjoyment out of helping others.”

Mr. John “Bubba” Benton Woodfin, age 85, of Murfreesboro, TN passed away Saturday, July 4, 2020 at his home. He was a lifelong resident of Murfreesboro and son of the late John T. Woodfn, Jr. and Virginia Black Woodfin. He was a 1954 graduate of Murfreesboro Central High School. Bubba attended MTSU before going into the United States Army. He came home to enroll at John A. Gupton College in Nashville where he was a 1957 graduate.

A fourth-generation funeral director, Bubba’s funeral service career began at age 12 riding with his father in the ambulance.  He has compassionately, selflessly, and humbly served the people of Rutherford County his entire life. Bubba made his famous cornbread for the families Woodfin Chapel served over the years. An avid sportsman and outdoorsman, Bubba hunted and fished throughout the world, and especially loved hunting with his friends in South Dakota. He loved hosting fish fries throughout the community for various charities, friends, and family. Another passion of Bubba’s was entertaining at his beloved cabin in the family’s backyard.

Bubba was a lifelong member and elder of Central Christian Church. He was a past president of the Rutherford County Sportsmens Club. Bubba’s civic involvement included the Noon Rotary Club where he was a past president and a Paul Harris Fellow. He served as president of the Tennessee Funeral Directors’ Association in 1974-1975 and was a former officer with National Selected Morticians, a worldwide independent funeral service organization. He was involved in countless philanthropic endeavors including he and his wife Kay being named as the 2009 Heart Ball Honorees and the 2014 Philanthropists of the Year by the St. Thomas Rutherford Society. Bubba also enjoyed his memberships at the Walter Hill Country Club and with the Hooper’s Supply Boys.

Graveside services will be held Wednesday, July 8, 2020 at 12:00 noon at Evergreen Cemetery. Julian Goodpaster will officiate.

Some thoughts from the community

Danny Beasley: "Mr Woodfin was one of the most compassionate men i have ever been around. He was always so carrying and helpful with all the times we needed him. Our community has truly lost a gem."

Ed Miller: Bubba and my Dad knew each other for years and when my Mom passed 4 years ago he drove the hearse to the cemetery in Woodbury. The pan of corn bread he gave the family on the day of the funeral reminded us all of some of good food made by our Mama."

Larry Thomson: "We used to hunt together! I loved him!"

Linda White:  "I remember when my dad passed away, I wanted to sing at his funeral. Everyone said that is not a good idea, you will brake down and cry. I did it anyway with no problem. Bubba was standing behind me and said after I finished, “Now that was beautiful.” He was always an encourager."

E. A. Rucker-Reed:  "SO SORRY to read this. I grew up in the 'Boro and babysat their girls as a teenager. Always thought a lot of the whole family."

Lori Arnette-Lanahan:  "I remember my dad, C.B. Arnette, would go to Bubba's cabin for cards and chitlings. Dad loved all of this with all his friends and Bubba was a dear friend to my dad. God bless your family through the sorry of loss."

Colleen Edgell:  We lived behind Bubba for 14 years. On his 70th birthday he drove his 1939 Packard into our back yard and said " Let's go to the car show." Bubba would come visit on his riding mower. Always smiling.

What are your memories of John B. “Bubba” Woodfin? Share them with us.