Tennessee has an 81.94% Save Rate for Shelter Pets 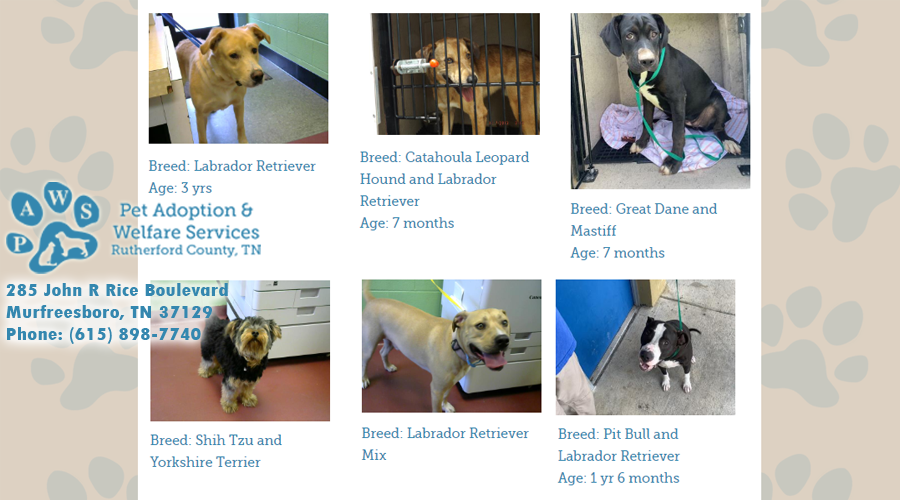 Of the 126,141 dogs and cats that entered Tennessee shelters in 2019, 103,355 found positive placements, for a total state save rate of 81.94%. Only 37.04% of Tennessee shelters are no-kill (a state is considered to be no-kill when every brick-and-mortar shelter serving and/or located within the state has a save rate of 90% or higher). 10,882 dogs and cats remain to be saved in the shelters that are not yet no-kill.

ADVERTISEMENT
In Murfreesboro, the Pet Adoption & Welfare Services (PAWS) office of Rutherford County holds a "Free-Fur-All Friday" event every Friday. During the every Friday event, pet doption fees are waived thanks to the Petco Foundation. PAWS also set up an online adoption website so that visitors can brows the dogs and cats that are currently available (above photo).

MORE: Julie Castle, chief executive officer, Best Friends Animal Society said, “We are seeing continued momentum and progress towards the goal of ending the killing of dogs and cats in U.S. shelters by the year 2025, with the overall number of pets being killed in the U.S. continuing to go down and the number of shelters that are no-kill going up."

Best Friends also released an inaugural state-by-state ranking of this data (view it here) and Tennessee is #17 in the country for shelter pet deaths.

Best Friends has worked with shelters throughout the state to help implement lifesaving programs, including Memphis Animal Services, Young Williams Animal Center, McKamey Animal Center and Metro Animal Care and Control. In Nashville, Best Friends has worked for three years guiding the SAFE Coalition, a voluntary group of 18 partner organizations that bring together animal experts in local lifesaving work, including spay and neuter, cat and dog rescue and safety net programming to help pet owners through temporary challenges or issues with their pet to avoid surrender or obtain alternate placement support. Through the coalition, Metro Animal Care and Control has reached a 90% lifesaving rate.

Castle continued, “For the past several years, Best Friends and progressive shelters nationwide have been changing the way they do business and the way they relate to their communities: simplifying adoption policies and requirements; building out community pet fostering programs; implementing trap, neuter, return (TNR) programs for community cats; passing more pet-friendly legislation to combat the retail sale of puppy mill dogs and breed discrimination; advocating for more pet-inclusive housing, and removing barriers for the public to help pets with the use of technology. And it is making a difference.”

Over the past three years, Best Friends has spearheaded a first-of-its-kind extensive data collection process that involved coordinated outreach to every shelter in America followed by additional research, data analysis, and technology development. To create the most comprehensive data set on animal welfare ever published, Best Friends collected data directly from shelters, state and local coalitions, government websites, and even FOIA requests. The Best Friends 2020 dataset (consisting of statistics collected during 2019) of U.S. shelters has a total net intake of 5,360,060 animals representing 4,850 known shelters. Of this intake total, 92% of the data is based on collected information from 3,608 brick and mortar shelters. The remaining 8% is estimated to cover the uncollected shelters and their respective counties.

“Best Friends has always believed that anyone can help homeless pets. You don’t need a rescue label, special credentials or permission to help save animals. Individual community members are the no-kill movement’s greatest resource. Putting this data directly into the hands of the public allows individual community members and advocates like the members of our 2025 Action Team to gain a better understanding of exactly which shelters and types of pets are most in need of help and helps to connect them to those shelters,” Castle added.

Best Friends Animal Society is a leading national animal welfare organization dedicated to ending the killing of dogs and cats in America's shelters. In addition to running lifesaving programs in partnership with more than 3,100 animal welfare groups across the country, Best Friends has lifesaving centers in New York City, Los Angeles, Atlanta and Salt Lake City, and operates the nation's largest no-kill sanctuary for companion animals. Founded in 1984, Best Friends is a pioneer in the no-kill movement and has helped reduce the number of animals killed in shelters nationwide from an estimated 17 million per year to around 625,000. That means there are still about 1,700 dogs and cats killed every day in shelters, just because they don’t have safe places to call home. We are determined to bring the country to no-kill by the year 2025. Working collaboratively with shelters, rescue groups, other organizations and you, we will end the killing and Save Them All. To check out our community lifesaving dashboard and for more information, visit bestfriends.org.