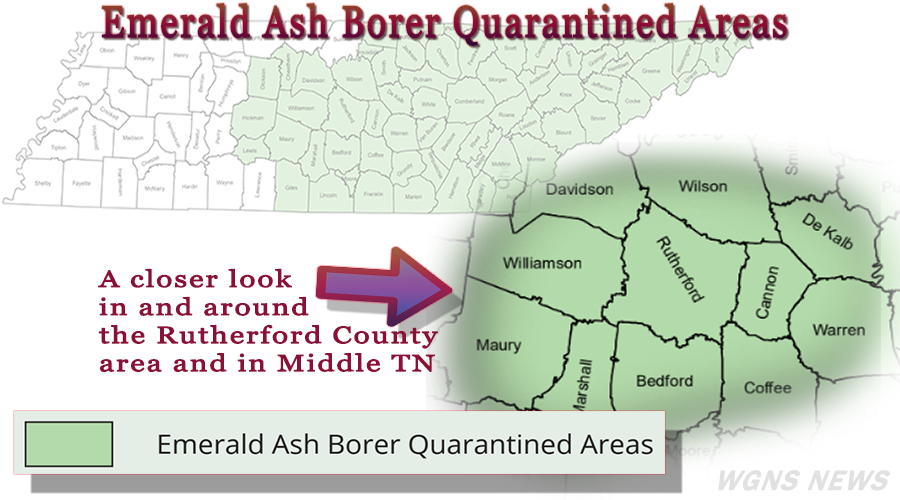 While Rutherford County was already quarantined for the Emerald Ash Borer (EAB), two more counties have been added to the list after the beetle was detected earlier this month.

Hickman and Dickson Counties join 63 other counties under a state and federal EAB quarantine. The quarantine prohibits the movement of firewood, ash nursery stock, ash timber, and other material that can spread EAB. The tree-killing beetle was recently intercepted through the United States Department of Agriculture’s EAB detection program.

“Firewood is especially troublesome to spreading EAB,” State Forester David Arnold said. “We ask that people don’t move firewood since EAB larvae can survive hidden in the bark. Outdoor enthusiasts hauling firewood unknowingly give the pest a free ride to establish new infestations at their destination.”

TDA’s Division of Forestry estimates that 5 million urban ash trees in Tennessee worth a total of $2 billion are potentially at risk from EAB. There are an estimated 261 million ash trees on Tennessee timberland, with an estimated value of $9 billion.

Signs of the beetle include a thin canopy or yellow foliage, small holes through the bark of the tree, or shoots growing from roots or a tree's trunk.

Citizens are asked to report any symptomatic ash trees to the Tennessee Department of Agriculture (TDA) and follow these guidelines:

• Don’t transport firewood, even within the state.

• Use firewood from local sources near where you’re going to burn it or purchase certified heat-treated firewood.

• If you have moved firewood, burn all of it before leaving your campsite.

• Watch for signs of infestation in your ash trees.