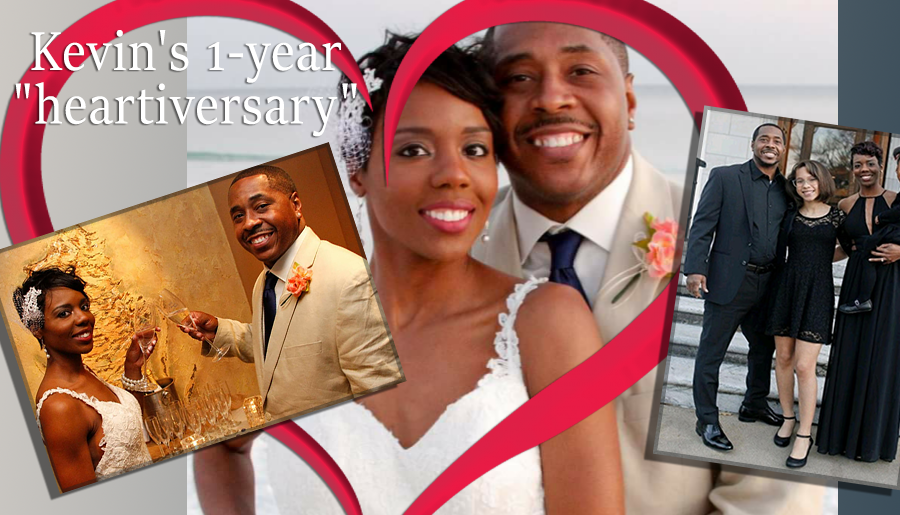 Monica and Kevin felt an immediate spark when they met at a mutual friend's birthday party in 2012. But before they could schedule their first official date, Kevin was rushed to the hospital. As the Memphis-area couple's relationship grew, Monica learned that Kevin suffered from a chronic condition called congestive heart failure. Despite the fact that he led a heart-healthy lifestyle, the 34-year-old barber periodically experienced episodes of extreme shortness of breath and severe pain caused by fluid buildup in his lungs and other organs. Lying in bed sometimes hurt Kevin so much that he had to stack pillows around his body for support and sleep with his chest bent to his knees. At some points, Kevin was in too much pain to go work. He took a variety of medicines and had regular cardiology appointments, but the bouts persisted as the couple married and built a life together in Olive Branch, Mississippi, with Kevin's young daughter.

In April 2019, the couple drove to Nashville for their first consultation with Dr. Warren Stribling of Ascension Saint Thomas Heart. Dr. Stribling surprised the couple by asking Kevin to stay in Nashville for about a week of observation. Although Kevin didn't have any clothes packed for a lengthy stay and Monica hated leaving town without her husband, she says now that "it was the best decision we could have ever made for our family."

ADVERTISEMENT
During that first stay at Ascension Saint Thomas West, Dr. Stribling mentioned that Kevin might ultimately need a transplant. After testing, observation, paperwork, and a short return to Olive Branch, Kevin was officially added to the transplant wait list in July 2019. On August 22, 2019, Dr. Ashok Babu announced that a heart had arrived for Kevin. Monica recalls that she was "a big ball of emotions" as she sat waiting during Kevin's operation. After the successful surgery, the couple stayed at the Hospitality House of Nashville for three months as Kevin regained his strength.

Today, the family of four is thriving. Monica, now 37, gave birth to their youngest daughter in 2016 and teaches personal finance to juniors and seniors at a Germantown high school. Kevin, now 42, has returned to his beloved job as a barber. Monica jokes, "I call Kevin my 'Tin Man' because he got his new heart." The couple celebrates little victories like the moment in February 2020 when Kevin was finally approved to drive his car again. They are taking extra precautions during the pandemic to keep Kevin safe, as being a recent transplant recipient puts him at higher-risk for developing Covid-19 complications.

"I used to wonder 'Why me, God'?" says Kevin, adding: "Now I think to myself, 'Why not me'? Why can't I be an example to others? I enjoy every day I get with my family and my job, and I ask God to use me however He wants."