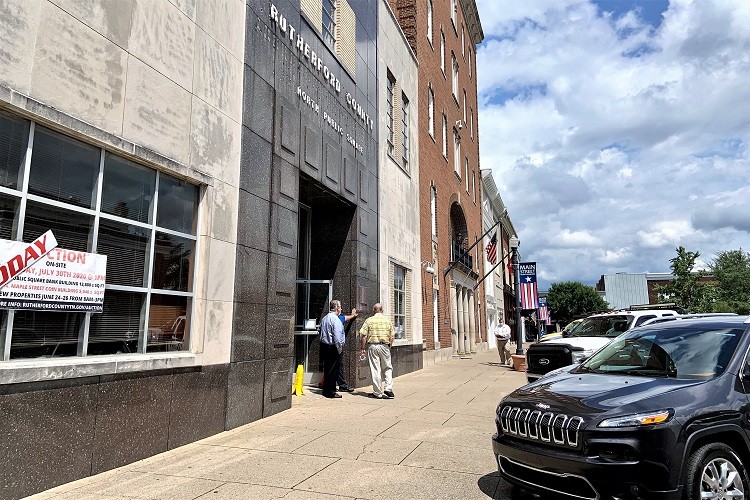 (MURFREESBORO) The old Mid South Bank building and the coin shop on the back both of the structure sold to Martin McGill and his wife at auction Thursday (7/30/2020) for $810,000, pending approval from the Rutherford County Commission.

The two buildings were purchased in the 1980s by the Rutherford County Government, therefore that governing body must approve the transaction during the next commission meeting.

Martin McGill and his wife were the high bidders after a back and forth battle. He  told NewsRadio WGNS what he planned to do with the historic structure . . .

The couple currently own and operate Whiskey Dix Saloon at 302 West Main Street in downtown Murfreesboro.

Financial Leader Jack Weatherford Was There

He first stepped foot in the structure on September 1, 1949. That was when the bank was three-stories tall. Weatherford reminisced . . .

The third floor was removed during the renovation, and huges marble squares were placed on the face and side of the bank.

You could tell that the structure held many memories for Jack Weatherford . . .

The structure was constructed in 1887 as a dry goods clothing store and furniture store. The rear of the complex was also later a battery and auto shop. In later years, the auto bays were bricked-in and the rear of the facility became a coin store.

The auction was coordinated by Deputy to the Mayor Steve Sandlin, who is also a licensed auctioneer.  Sandlin conducted the first rounds of bidding.

There were a total of three auctions held.

The first was for the rear portion of the building, known at the Coin Building. Its address was listed at 124 N. Maple Street. That facility was approximately $5,376 square feet.  Final bid was $155,000.

The third auction was comprised of the total bids of the first and second rounds, plus 5 per cent. That was $661,500. If no one bid on that total, then the two previous bids would have taken the property.

That did not happen, and the final bid of $810,000 was significantly more than the original two bids, so Martin McGill and his wife were the top bidders.

NewsRadio WGNS will be following the progress as the package now goes before the Rutherford County Commission on August 13, 2020.

The Entire Auction Was HISTORY

For historic purposes, NewsRadio WGNS has preserved all three of the auctions. After all, this was a 133-year old structure that was constructed in 1887.  (NOTE: the long pauses of silence between comments have been edited "out" so that listening time is shortened without effecting content.)

1.  COIN BUILDING:  Deputy to the County Mayor Steve Sandlin, who is also a licensed auctioneer, handled the first auction for the coin building at 124 N. Maple Street.

2.  BANK BUILDING:  Longtime auctioneer Bobby Blackforddid the second and final auction. The second auction was for the bank structure at 22 N. Public Square only.

3.  Combined Buildings (Bank and Coin):  The third auction was for both parcels of property combined. Based on the way the auction was organized, that was the winning bid. Blackford also handled the final bids. Here is how that went.

Share your memories about the old bank building, coin shop or anything dealing with this structure.  Email your memories to:  news@wgnsradio.com