According to a police report, White was found to be in possession of child pornography. The report also suggests that more charges are pending. 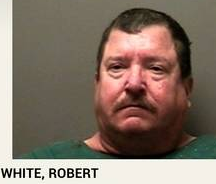