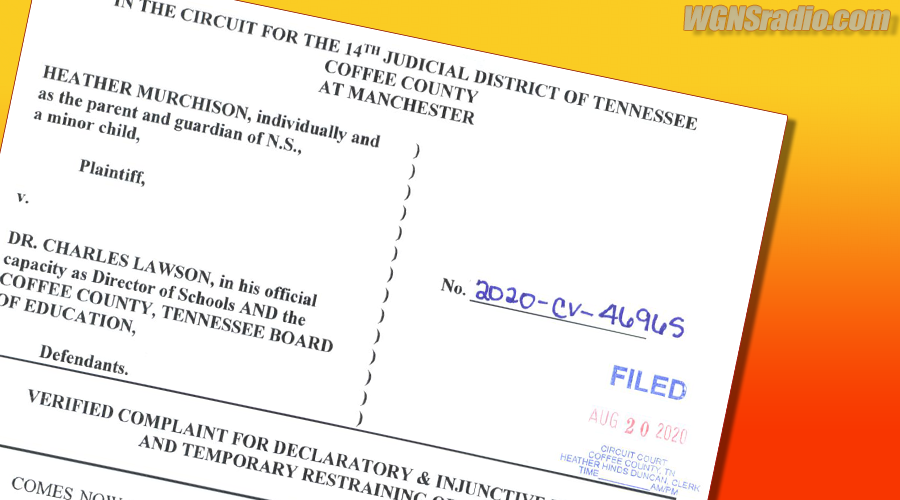 A complaint has been filed against the Coffee County School System in Circuit Court seeking injunctive relief against the school system’s mask mandate.

The complaint calls for the schools to cease and desist the mask mandate implemented on Aug. 10, citing no legal authority. A judge has yet to review the complaint, which was filed by Parnham Law Office on behalf Heather Murchison, who is the mother of a student in the system.

The complaint states that Murchison’s child was refused the ability to attend class on Aug. 13 and Aug. 18 and was sent to in-school suspension when he refused to wear a mask “based upon personal healthcare decisions made by hiimself, in conjunction with his legal guardian, Mrs. Murchison.”

The complaint goes on to state that “neither the Tennessee General Assembly, nor the State Board of Education have promulgated any mandate that students within the state wear a face mask as a condition precedent to entry into a public school.

“Moreover, the Tennessee State Legislature, in its limited grant of authority, has not authorized local boards of education to promulgate compulsory health mandates before allowing a student to attend public school within a school building.”

The complaint asks that the court enter a judgement for a temporary restraining order to prohibit the schools from enforcing the mask mandate, and also a permanent injunction prohibiting the enforcement of the mandate. The filing also asks that the school board pay for court costs and attorney’s fees for Murchison.

Director of Schools Dr. Charles Lawson told partner station WMSR that this matter will be handled by the school board attorney.