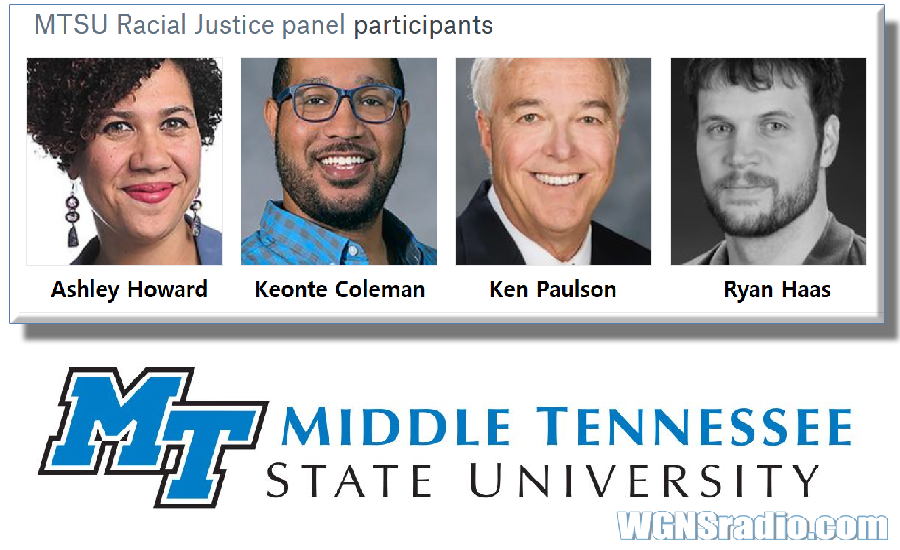 MURFREESBORO, Tenn.— Many Americans, whether they're observers or participants, are feeling overwhelmed by 2020’s onslaught of protests, pandemics and politics, but members of anMTSUpanel say they're seeing a surprising side of our national unrest: hope.

Speaking live via Zoom discussion Sept. 16, members of the"Racial Justice Protests and the First Amendment"panel agreed that this year's gatherings, which began in Minneapolis after police killed George Floyd in May and have spread to more than 2,000 American cities in all 50 states, are unique to our time.

"This has just been such a long period of one major change coming after another, and how to process this moment as a person is hard. But I do see a lot of optimism, actually," saidRyan Haas, an editor and producer for Oregon Public Broadcasting who's been in the middle of the protests in Portland, Oregon, with his team of investigative journalists.

"As tense as people seem, as divided as people seem, I do see a lot more people opening up to this idea that America has not fulfilled what our founding documents say, and we should include more of those voices who have historically been marginalized.

"I'm seeing more and more people use this language of inclusion and (saying) ‘How do we hear different voices?’ and ‘You know, white people in this country have certainly had plenty of time to have their say; maybe we should have other voices come to the table and talk about how we can make our country better.'"

Black Lives Matterorganizers joined with other groups in Portland for nightly protests to demand justice for Floyd's death, along with thousands more Black Americans killed during encounters with police.

Those nightly events turned violent in July when the U.S. Justice Department sent federal agents to the city, wielding tear gas, rubber bullets and other weapons against protesters. Recent gatherings have dwindled because of toxic air created by wildfires burning on the West Coast.

"The most important thing to acknowledge here is that these protests are not just idle. People are not just doing it for the sake of doing it; they're doing so to evoke change," said panelistAshley Howard, a professor in the University of Iowa’s African American Studies Program whose expertise includes the global history of racial violence and the racial-oppression protests that galvanized 1960s America and creative massive change for so many citizens.

“One way … we're seeing victory in this moment is the fact that you're seeing attitudes broadly change. Monmouth University had a poll, and 76 percent of the people that they polled said that racial injustice, racism, is a problem in this country. That is a significant finding for many people of color — they’re like, ‘Well,obviously.’ But for a majority of people to begin to think that, it's important.”

Ken Paulson, director of theFree Speech Center at MTSUand a professor in theCollege of Media and Entertainment, said that while 1968 was a "turning point for the entire country, we're in a place we've never been before as a nation."

Noting that the First Amendment to the U.S. Constitution, ratified in 1791, guarantees five freedoms, including what he called "the two least known" — the freedom of assembly and the freedom to petition the government — Paulson, an attorney specializing in First Amendment issues and a former USA Today editor-in-chief, said protests, which are protected by those "least known" freedoms along with free speech, are the only First Amendment activities specifically mentioning "the right of the people."

"What we have today is 1968, plus a pandemic, plus this social media option that has transformed the way we communicate — and oddly enough, not for the better," he said.

"It's impossible to say where it's going. ... We have never been down this road before, but I'm encouraged that a nation, when faced with injustice, can get out of their homes, put down their phones, pick up a sign and raise their voices in protest, using the weapons of 1791. There is hope, and we have the tools we need to make a difference."

Keonte Coleman, an assistant professor in MTSU’sSchool of Journalism and Strategic Media,moderated the hourlong panel discussion, which was presented by the university'sJohn Seigenthaler Chair of Excellence in First Amendment Studiesand the Free Speech Center.

The complete discussion will be available soon at the Seigenthaler Chair of Excellence YouTube channel,http://ow.ly/ycGm30ranW2.

MTSU’s Seigenthaler Chair of Excellence in First Amendment Studies honors the late John Seigenthaler, longtime editor and publisher of The Tennessean and founder of the First Amendment Center, and his lifelong commitment to free expression.Currently led by veteran journalistDeborah Fisher, it sponsors activities at MTSU that include visits from distinguished professors and lecturers, research, seminars, and hands-on training for student journalists.

The Free Speech Center’s resources, including the First Amendment Encyclopedia, are open to the public anytime athttp://freespeech.center.