Alexander: Vaccine Program on Track to be an Unprecedented Sprint to Success 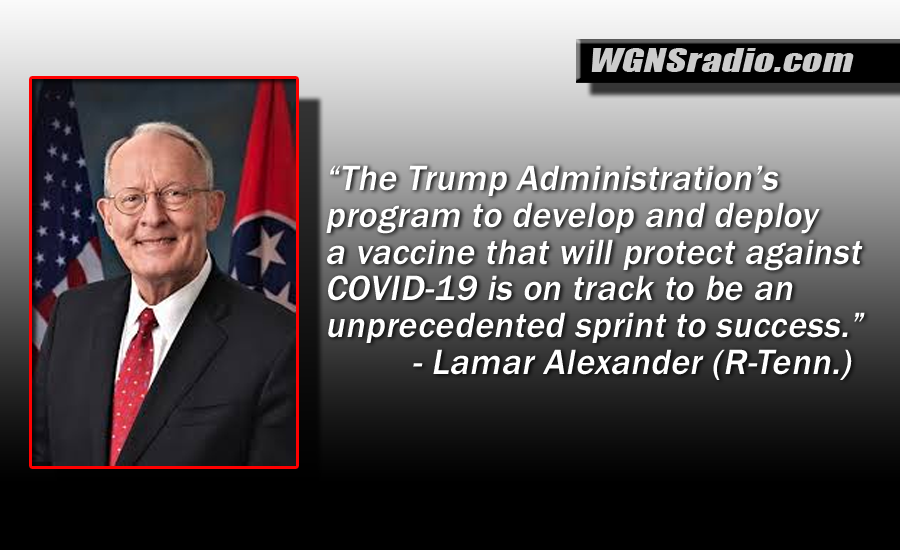 “The Trump Administration’s program to develop and deploy a vaccine that will protect against COVID-19 is on track to be an unprecedented sprint to success,” the Chairman of the United States Senate health committee said. “The program, called Operation Warp Speed, will save lives without cutting corners on safety and efficacy,” he said.

Chairman Lamar Alexander (R-Tenn.) said “The secret to this success is that the government — in partnership with private industry — is for the first time developing and manufacturing a vaccine in parallel. In other words, the Operation Warp Speed plan is to manufacture tens of millions of doses of the six vaccine candidates at the same time the clinical trials are ongoing and the Food and Drug Administration (FDA) works to determine whether they are safe and effective. If the FDA does not approve the vaccine, it will not be distributed. So the risk is taxpayer money, not the safety and efficacy of the vaccines.”

Alexander made his remarks during the Senate health committee hearing “COVID-19: An Update on the Federal Response,” where Trump Administration officials Dr. Anthony Fauci, Admiral Brett Giroir, Dr. Stephen Hahn, and Dr. Robert Redfield testified about how the federal government is continuing to respond to the COVID-19 pandemic and help states respond, how soon we can expect more treatments and a vaccine for COVID-19, and what steps Congress can take now to prepare for the next pandemic.

Alexander added: “The second unprecedented story of the United States’ response to COVID-19 is the development of treatments. There are five products authorized for emergency use today to help treat and manage COVID-19 symptoms, including remdesivir, certain steroids, a blood thinner, and convalescent plasma.

“Operation Warp Speed officials are optimistic that more treatments will also be identified or developed and in clinics this fall, with potential for approval or authorization by the end of the year. The most promising appear to be monoclonal antibody cocktails, which have also been used to prevent and treat other diseases, like Ebola. Three companies are in clinical trials of antibody cocktails.

“Knowing that there is some medicine that will help treat COVID-19 should greatly relieve the anxiety Americans feel about going back to school, college, work, and out to eat.”

Alexander concluded: “A third success story is the explosion of fast, cheap, reliable diagnostic tests. After initial missteps, our country lost several crucial weeks in distributing the diagnostic tests that would help to identify and isolate those who contracted the virus.

“But since then, an unprecedented effort of public and private research has created capacity this month for administering more than 90 million tests, about half of them rapid tests, according to Admiral Giroir, one of our witnesses today.

“Abbott Laboratories says that it is on track to produce 50 million of its new tests a month by October, which can produce a result in 15 minutes and costs $5 per test. The government has purchased 150 million of Abbott’s tests to help expand testing in places like schools and nursing homes.

“Congress funded the so-called ‘shark tank’, or Rapid Acceleration of Diagnostics (RADx) initiative at NIH, with the objective of developing and deploying tens of millions of new, reliable, inexpensive rapid tests.

“Dr. Francis Collins, Director of the NIH, has reported that combined, these new technologies have the potential to add to the country’s testing capacity by at least 60 million tests a month by December. Dr. Collins has told me: ‘this is not the end of the story—there are lots of additional technologies coming through the pipeline, many of which are rapid, inexpensive, point-of-care and home-based tests.’

“Until vaccines and treatments are widely distributed, the explosion of many cheap, reliable, rapid diagnostic tests is our best weapon to build confidence among the American people that it is safe to go back to school, college, back to child care, and back to work.”