Retired MTSU professor Mary Nichols has been deployed with multiple hurricanes this season; several other local volunteers deployed for hurricanes and wildfires 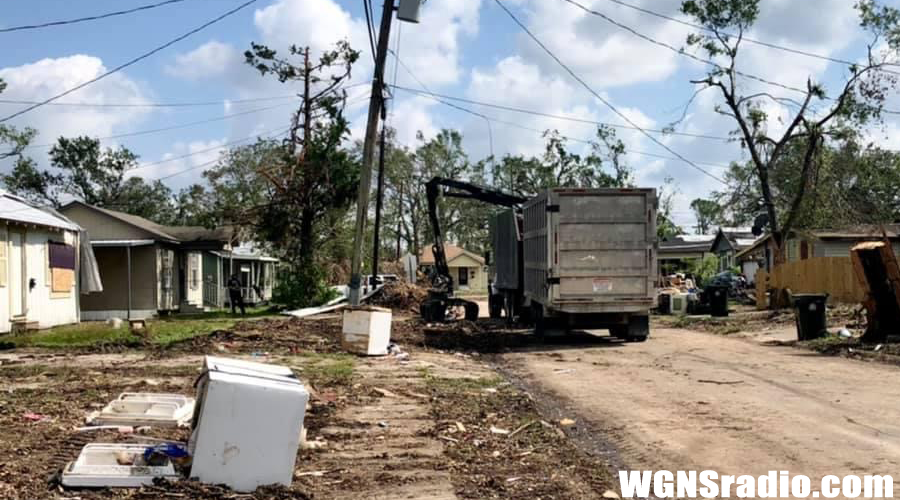 MURFREESBORO, Tenn. – Retirement looks very different for former Middle Tennessee State University mass communications professor, Mary Nichols. While some may take it easy following their careers, Nichols spent a good portion of her summer, and now fall, helping those affected by hurricanes on the Atlantic and Gulf coasts.

As a local American Red Cross volunteer, Nichols is currently deployed to Louisiana helping with damage assessment from Hurricane Delta. Earlier this season, she deployed to North Carolina as a shelter manager after Hurricane Isaias. She was deployed again quickly and says she actually “chased” Hurricane Marco, which threatened the Gulf coast. Marco eventually fizzled out and was downgraded to a tropical depression. This dedicated volunteer stayed in service and joined the team assisting with Hurricane Laura, which struck Louisiana in late August.

ADVERTISEMENT
It may sound like a busy way for someone to spend their retirement, but she loves being part of an organization that serves others. “I do it because it gives me a feeling of giving back to the community, of course, that’s why most people do it,” Mary said. “That feeling of making people feel that they are still part of a community, even though they’ve just lost everything, that means a lot.”

“Mary is one of at least 10 local volunteers who have deployed this season to assist with hurricanes to the south and east and the devastating wildfires out west,” said Tara Stone, executive director of the Heart of Tennessee chapter of the American Red Cross in Murfreesboro. Many of those volunteers, like Mary, have deployed multiple times this year.

“Volunteers are the backbone of the American Red Cross and are key to fulfilling its mission,” Stone added.

“All of our volunteers who are deployed right now, as well as all that have deployed in the past, do so because they want to help,” Stone said. “They have all done the training to be ready to serve others in their time of need, and I continue to be in awe of their dedication. Not only do they serve their local communities daily, but they also assist neighboring chapters and those across the United States when called upon.”

Mary Nichols didn’t originally plan to spend her retirement years as a Red Cross volunteer. About five years ago after retirement, she was vacationing abroad and met some others who had volunteered. That’s when the original seed was planted.

“My sister and I took a trip to China,” she said. “In our tour group was a couple, who volunteered with mental health services with the Red Cross, and they had just come back from a hurricane deployment and they were talking about all this stuff they were doing. I told myself, I’ve got time. I'm retired. I should volunteer.”

Officially a trained volunteer, in two weeks, she was deployed to assist with the aftermath of Hurricane Michael, a powerful Category 5 hurricane that struck Mexico Beach, Florida, in October 2018. Mary’s deployment occurred about a month after the storm’s landfall, so she arrived at a time when the shelter and recovery efforts were already in full force.

“Everything was set up and established and it was really helpful to see it all running like clockwork,” Nichols said of her first experience, where they served 400 clients. “And that was a month out, so I can’t imagine what it was like in the beginning.”

Emily Girard serves as the disaster program manager for the Heart of Tennessee Chapter in Murfreesboro and has also been deployed. She grew up in the small logging town of Florence, Oregon, along the Pacific coast.

She never imagined that one day she’d return to her home state to work in a disaster-response shelter, but through her involvement with the American Red Cross, Girard spent two weeks there in September for a deployment helping those who have lost everything in the recent wildfires.

Staff members are required each year to deploy to at least one regional disaster, so when the fires struck Oregon, Emily volunteered for the assignment.

“Their recovery is going to be long because there are communities that are completely burned,” she said. Girard deployed to a shelter in Portland, Oregon, where she served as a shelter lead.

The shelter assisted those displaced residents who were directly affected. There are multiple American Red Cross shelters serving the area and this experience was one she will never forget.

Like so many from the Heart of Tennessee chapter, Girard has been deployed locally to neighboring communities, including the tornadoes that affected the Cookeville area earlier this year.

In fact, she’s served at four smaller disasters in Middle Tennessee, but the Oregon assignment was her first large-scale national deployment. Working with the people and seeing everyone serving one another was truly meaningful she said.

“It’s really where our mission comes into play,” she added. “We’re taking care of their basic needs.”

Mary Nichols has a message for those who are thinking about volunteering. “They need people,” she said of the American Red Cross. “They are desperate for people to volunteer to deploy to disasters because they are stretched so thin with the many different emergencies right now.”

There are plenty of ways to assist, even for those who can’t deploy to other areas of the country. There are virtual opportunities, such as data entry and client case work, and through financial and blood donations.

Those interested in learning more about how to help should contact their local American Red Cross chapter, check out RedCross.org or call 1-800-Red Cross.

The Heart of Tennessee Chapter headquarters is located at 501 Memorial Boulevard in Murfreesboro. The site includes a donation center for those interested in donating blood.
Sections: News