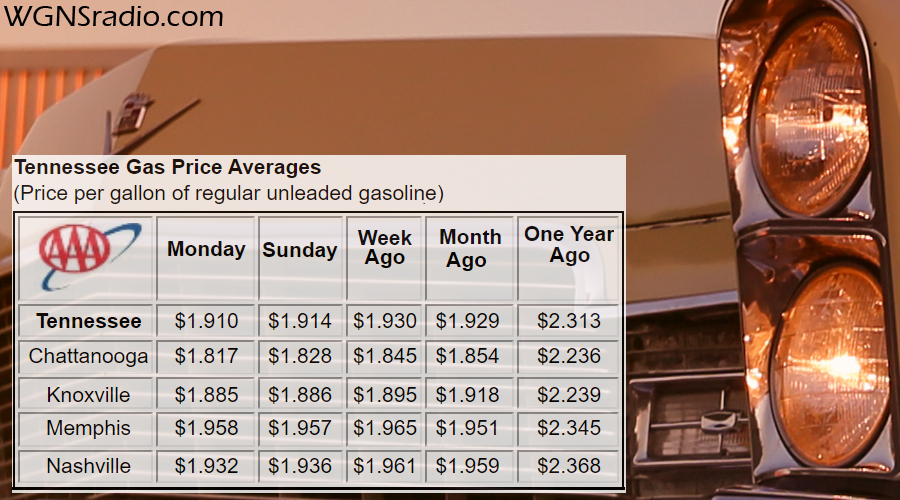 “The U.S. has a very healthy level of gasoline stocks due to lower demand and that is keeping gas prices low,” said Megan Cooper, spokesperson, AAA - The Auto Club Group. “Tennessee's state gas price average has declined the past 13 consecutive days, for a total discount of four cents.”

Gasoline demand has dropped significantly since the beginning of the month, down from 8.8 million b/d to 8.2 million b/d, according to the latest Energy Information Administration (EIA) report. This latest demand measurement is the lowest since mid-June. While the drop isn’t out of the ordinary for this time of year, people tend to drive less in the fall, it is a staggering 14% less than last October. On the week, gasoline stocks increased to 227 million bbl, putting total supplies at a 4 million bbl surplus compared to this time last year.

This summer brought an increase in demand compared to spring, but with coronavirus cases increasing, activity at the pump is declining – both fill-ups and prices. Today’s national average is $2.16, which is the same price as last week, 2 cents cheaper than last month and 44 cents less than last year.

It is a little more than a month until the end of the Atlantic hurricane season, which is proving to be one of the most active on record. A threat to the Gulf of Mexico - Tropical Storm Zeta - is forecast to become a hurricane by Wednesday. The National Hurricane Center is warning the storm could bring storm surge, rainfall and high winds from central Louisiana to the western Florida Panhandle later this week. It’s most likely that Zeta, similar to other tropical storms and hurricanes from earlier this season, will not have an impact on gas prices nationally due to the high level of gasoline stocks in the United States.