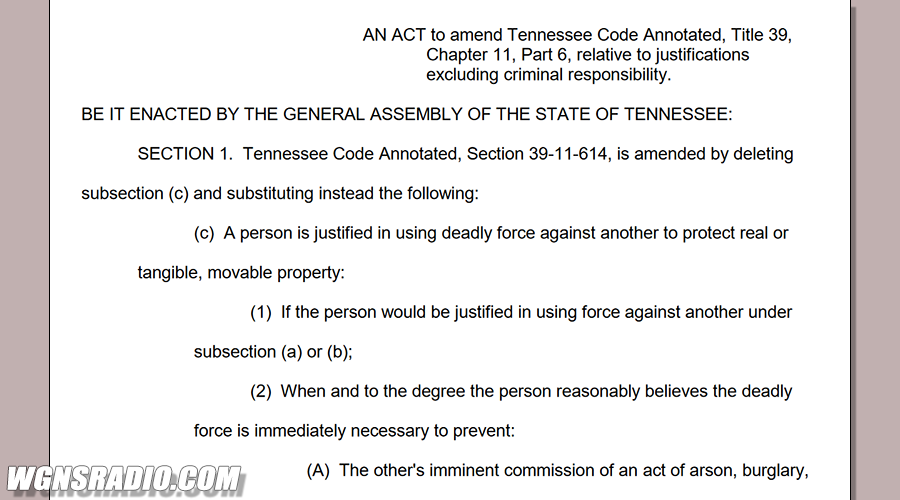 Rep. Jay D. Reedy has filed House Bill 0011 which proposes a major change in Tennessee law. The unusual thing is that the bill actually appears to reflect what a lot of Tennesseans already believe is the law but is not. The new legislation reflects a heightened interest in the rights of people to protect their homes, businesses, properties and items from thieves, rioters, looters and other criminals.

ADVERTISEMENT
Under current Tennessee law (see generally Tennessee Code Annotated Sec. 39-11-614 for example), a civilian is not allowed to use deadly force to a) protect personal property, b) to stop a trespass on real property, c) to terminate an attempted theft of property, or d) to make a citizen’s arrest. Further, under Tennessee law, the use of “deadly force” does not require that a person actually discharge a firearm or cause injury with any other weapon. A person may be accused and convicted of using deadly force merely by “brandishing” a weapon, that is, displaying it in a threatening manner towards another.

Tennesseans have expressed a heightened interest in their belief that they can protect their homes, cars, businesses and property from criminals particularly after the riots and looting events that have occurred across the nation in recent years. Further, the events involving Mark and Patrician McCloskey who stood outside their home in Missouri with firearms to resist a mob have also generated a great deal of discussion in Tennessee about what rights do Tennessean’s have to protect their homes from rioters, looters, violent protesters or mobs.

Rep. Reedy’s bill is the first to be filed this year that touches on key Second Amendment issues related to individual rights to protect their lives, families and assets. As initially filed, it proposes circumstances under which an individually might be legally justified in Tennessee to use deadly force against a specific criminal or group of criminals (e.g., brandishing a weapon or yelling “leave my property or I will shoot”).

In light of the events of 2020 and the increasing trends over the last few years of public episodes of intentional violence, mobs, looting, rioting often with little or no police resistance (particularly in major cities), the rights of individuals who are victims of such planned criminal events is now in the spotlight.

Above Report from the Tennessee Firarms Association