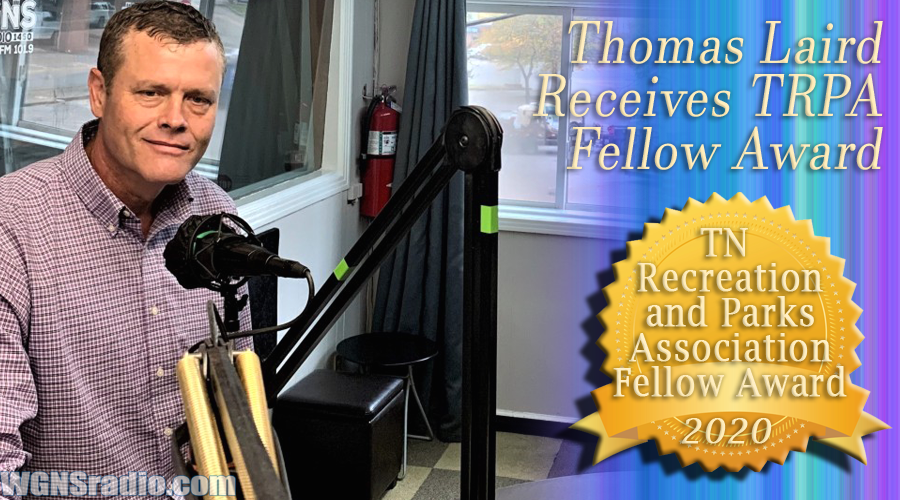 The Fellow Award is TRPA's highest award to honor and recognize individuals who have significantly contributed to and influenced TRPA and the parks and recreation profession throughout his/her career. Since 1972, this award has recognized professional members of the TRPA that during their career have made outstanding contributions to the parks, recreation and conservation field over and above their normal and expected duties.

Laird has served the families and youth of Rutherford County while being an exemplary role model and leader. Hired in 2000 as an assistant athletics coordinator, he quickly rose in the ranks to Athletics Coordinator, Recreation Superintendent, then Assistant Director for the department in 2018. During his tenure with Murfreesboro Parks and Recreation, Laird has played a critical role in project management and program deployment for five new facilities and has increased athletics league participation by over 300 percent.

For the past 16 years, you’ll find “Mr. Thomas” in the middle of a group of toddlers, entertaining them with games, songs, and harmonica dance parties every Friday morning. On Saturdays in the fall and spring, “Mr. Thomas” is the resident pitcher, best buddy, biggest supporter, and most dedicated advocate for the hundreds of participants and families of the Murfreesboro Parks and Recreation Department’s Miracle League.

Throughout his service to the Tennessee Recreation and Parks Association, Thomas has advanced the association by coordinating multiple workshops, including the Athletics / Maintenance workshop, the Central District workshop, and the Management Performance Institute. Under his leadership, the Athletics / Maintenance workshop became the highest attended educational offering outside of the state-wide annual conference. Additionally, in 2017 Thomas led a team that updated financial policies to secure the association’s future and oversaw the restructure of membership strategies. In 2019 Thomas implemented long term investment strategies for the association.

Laird currently serves on the Board of Directors for Tennessee’s Safe Stars program through Vanderbilt University. The Safe Stars initiative recognizes youth sports leagues throughout Tennessee for providing the highest level of safety for their young athletes. Safe Stars consists of three levels – gold, silver, and bronze – and involves implementation of policies around topics such as concussion education, weather safety and injury prevention. With Laird’s guidance, Murfreesboro Parks and Recreation became the first department in the state of Tennessee to be awarded the Gold Level status in the Safe Stars program.

Since 2007, Laird has received the following Tennessee Recreation and Parks Association awards, as well as being a key contributor in numerous 4-Star new facility and renovation awards:

• Four Star Renovated Facility Award, 2014: Member of the design team and the project manager for the renovation of the McFadden Community Center

• Four Star Renovated Facility Award, 2015: Member of the design team for the renovation of SportsCom

• New Facility Award, 2018: Member of the design team, and Project Manager for the construction of "The Miracle Field" park

• Maynard Glenn Award, 2011: “Toddler Time with Thomas”. The Maynard Glenn Award is presented by the Municipal County Section and recognizes personnel or specialists who have planned, conducted or were responsible for the Most Outstanding Recreation Program of the year.

• Robert Horsley Award, 2008. This award recognizes community center personnel who have planned, conducted or was responsible for the Most Outstanding Community Center Program during the year.

Murfreesboro Parks and Recreation Department (MPRD) is dedicated to providing vibrant public spaces and inclusive programs delivered with visionary leadership and caring staff that engage the individual and strengthen the quality of life of our community.

Tennessee Recreation and Parks Association (TRPA) is the leading nonprofit organization for parks and recreation in Tennessee with over 1,700 members united to strengthen those committed to the benefits of parks and recreation by supporting highly effective professionals to achieve healthy, livable communities.
Tags: Award Murfreesboro Tennessee Thomas Laird TN
Sections: News