Judge David Bragg Nears Retirement After 12 Years on the Bench 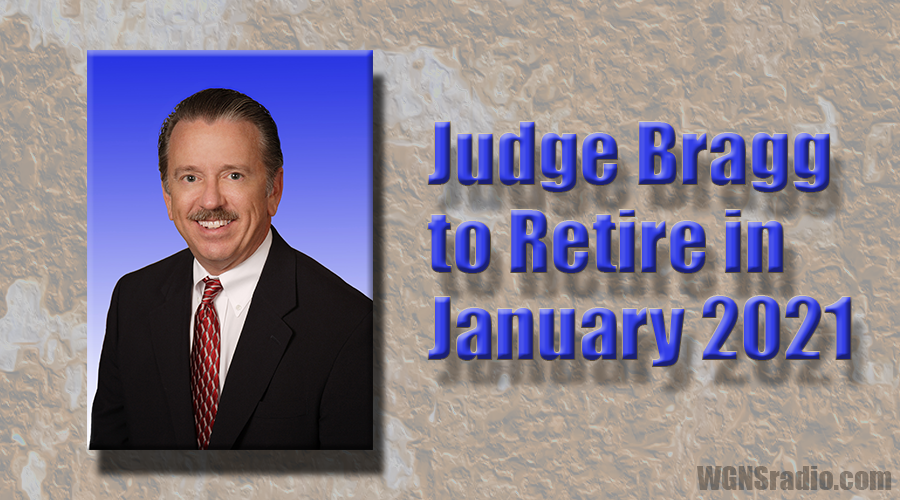 After more than a decade of public service, 16th Judicial District Circuit Judge David Bragg will retire effective Jan. 1st, 2021. A lifelong Murfreesboro resident, Judge Bragg won his seat on the bench in 2008, following the retirement of Judge James Clayton.

Judge Bragg still remembers how his first day on the job found him feeling excited and unprepared for what was to come. His new colleague on the Sixteenth Judicial District Circuit Court, Judge Don Ash, called him and informed him that he had a defendant on his docket who wished to enter a plea. Unaware of the process of taking a plea, Judge Bragg told Judge Ash he didn’t know what to do.

ADVERTISEMENT
Judge Ash bestowed some wisdom on him and said, “Today is a good day for you to learn.” After donning a robe for the first time, Judge Bragg went into the courtroom and took the plea.

“I never saw the defendant again so I must have done okay,” he said.

Judge Bragg had thought about being a lawyer since he was a child. Back then, Murfreesboro was just a small town with a population of less than 20,000. His family was tight-knit, and he lived just down the street from his grandparents and his aunts and uncles. Public service was ingrained in his life through the work of his father, John Bragg, a longtime member of the Tennessee House of Representatives.

Entertainment came from a three-channel, black & white television set that played courtroom dramas like Perry Mason and The Defenders. Young Judge Bragg was enamored with these programs, seeing the lives of the protagonists as exciting and rewarding.

Since he seemed drawn to the legal profession, Judge Bragg’s father began to introduce him to lawyers that he knew from around Murfreesboro, including future Chancellor Whitney Stegall.

“My father introduced me to Whitney Stegall, when I was ten years old,” Judge Bragg remembered. “Whitney, who joined Rick Mansfield and I to start our firm in 1994, talked to me about being a lawyer. I remember Whitney told me, ‘There has never been a lawyer in Rutherford County who died with any money.’”

Judge Bragg did not enter the legal field right away. Instead, led by his passion for working with students, he started his career as the director of university housing at Middle Tennessee State University.

He left MTSU to become publisher of the Cannon Courier, a newspaper in Woodbury that his brother Tommy, the future three-term mayor of Murfreesboro, had purchased. While at the Courier, Judge Bragg took pride in keeping the community informed on matters of public importance, including local politics.

He knew that the newspaper business was not his ultimate calling, though.

“I met an acquaintance in a parking lot who told me he was going to law school at the Nashville School of Law,” Judge Bragg said. “I said I always wanted to go to law school and he encouraged me to apply. I talked with my wife, who encouraged me, and I applied and was accepted to NSL.”

After graduating, Judge Bragg went into private legal practice for 14 years before deciding to pursue a judicial career. The opportunity arose in 2008, when Judge Clayton stepped down from the bench. Judge Bragg was the only candidate who qualified and ran unopposed for the seat. His mother, upon learning he was the only person who qualified, quipped, “Well that ought to tell you what kind of job it is.”

For Judge Bragg, the hardest part of going from the bar to the bench was being the center of attention in the courtroom. He looked to mentors like Chancellor Stegall, Judge Daniel, and Judge Clayton to help him along the way. Their examples guided him through challenging times, like when he had to run in a contested election in 2014. As the incumbent, Judge Bragg continued to perform his judicial duties while running for re-election.

In the end, though, Judge Bragg was successful and won with 53% of the vote.

“The day after the election I had a full docket in court,” he recalled “When I walked on the bench, all the attorneys in the room, both the state’s and the defense attorneys, stood and applauded. That was a great honor and very humbling.”

One of the highlights of his career has been presiding over the Rutherford County Recovery Court, something he has done since 2014.  That court aims to curb recidivism by connecting non-violent drug offenders with an intensive program of judicial supervision and rehabilitation services.

In addition to his work on the bench, Judge Bragg has also held teaching positions at both MTSU and the Nashville School of Law. While a professor at MTSU, he taught Business Law in the College of Business. At NSL, he taught Sales and Secured Transactions. Judge Bragg retired from his position at NSL last year.

“Judge Bragg has long shown the utmost in dedication to the school and its mission,” Former Tennessee Supreme Court Justice and President and Dean of NSL William Koch said. “His experience as an alumnus of the school shows in the care and attention he gave to his students.”

While Judge Bragg learned a lot from his colleagues on the bench over the years, he also served as a model to others, giving young lawyers an example what a judge should be.

“As a young lawyer, I had my first motions to suppress, my first bench trial, first jury trial, first first-degree murder trial, all in front of Judge Bragg,” said Amanda Gentry, a criminal defense attorney based in Middle Tennessee. “The way he treated me as a young lawyer was with kindness, patience, and confidence in my ability to advocate for my clients. I'll never forget the bench trial. It was a horn-honking harassment trial. His ruling from the bench was thoughtful, compassionate, and fair.”

After retirement, Judge Bragg looks forward to spending time with his wife Nancy. He will also continue to be an active member of First Baptist Church, where he has long been a deacon, teacher, and church moderator.

Looking back over his career in the judiciary, Judge Bragg is proud to have served alongside so many dedicated judges.

“I recognize I am not unique,” he said. “I am a collection of the judges I observed when I worked at the newspaper, when I went to law school, and when I served as an attorney. I have tried to take the best of their characteristics to model in my service. Any failure to be the best is my fault and any praise for any success is due to them. It has been a privilege to serve the people of my community and with the judges they have selected.”