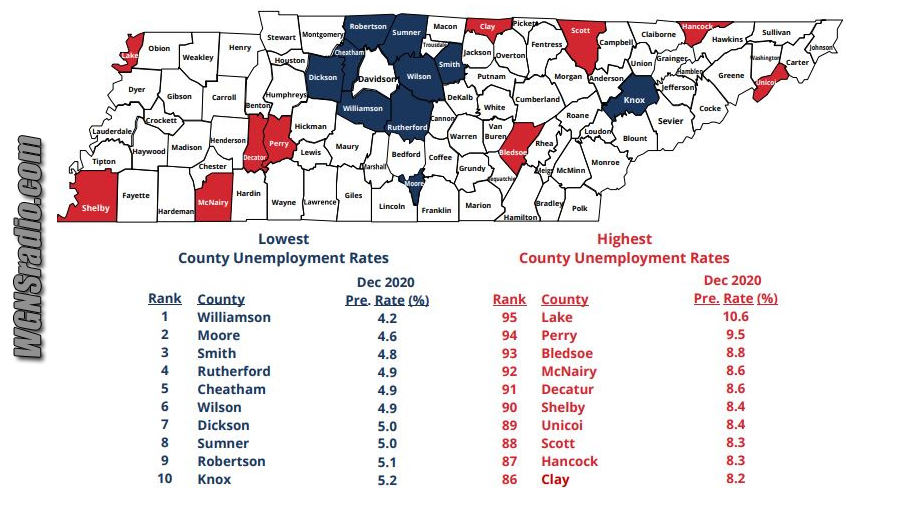 Two additional counties are tied with Rutherford and holding at that 4.9% jobless rate. Cheatham and Wilson County both report a 4.9% unemployment rate.

ADVERTISEMENT
Despite the low rate of unemployment most of Middle Tennessee is seeing, the numbers are up slightly.

Across the Volunteer State, the latest jobless numbers show unemployment increased in each of Tennessee’s counties during December 2020, according to new data released by the Department of Labor and Workforce Development (TDLWD).

There were six counties with an unemployment rate of less than 5% in December, 88 counties had rates greater than or equal to 5%, and one county had a rate higher than 10%.

Williamson County recorded December’s lowest unemployment rate among Tennessee’s 95 counties. The rate did increase 0.9 of a percentage point during the month to 4.2%. One year ago, Williamson County’s jobless rate was 2.1%.

A complete analysis of December’s county unemployment data for Tennessee is available here.

Statewide, unemployment increased in December. The preliminary, seasonally adjusted rate for December came in at 6.4%, an increase of 1.2 percentage points from November’s revised rate of 5.2%.

Nationally, unemployment held steady between November and December at 6.7%.

Tennessee employers are searching for employees to keep their businesses moving forward as the state’s economy continues to rebound. There are currently more than 230,000 open positions posted on the state’s workforce development website, Jobs4TN.gov.

TDLWD also offers the Tennessee Virtual American Job Center (VAJC). The new website located at www.TNVirtualAJC.com allows Tennesseans to research different programs, from different state agencies, that can help them remove barriers to employment so they can move back into the workforce.