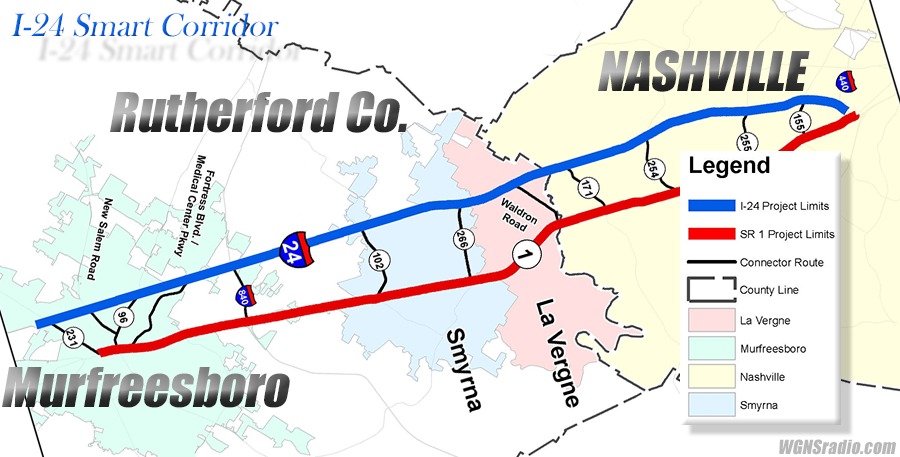 Traffic continues to grow throughout Rutherford County, which is a growing concern when it comes to roadways and commuters.

ADVERTISEMENT
One solution to increased traffic is to add more roads, but of course that can easily be viewed as a temporary solution because as new roads are built, new businesses and residential areas will arise.

Roadway changes and the addition of new roads has helped areas like Thompson Lane at Old Fort Parkway. There, the traffic count has gone from nearly 28,000 vehicles in 1996 to 22,308 vehicles in 2018.

After Sam Ridley Parkway was widened, commercial growth grew exponentially. Everything from a Super Target to restaurants and a movie theater brought in high traffic numbers.

The continued growth in Rutherford County has led to more and more talks about everything from electric buses to commuter rail lines and even a monorail between Murfreesboro and Nashville.

In the past 8 years, discussions have risen and fallen about the idea of a commuter rail line. The biggest part of the puzzle on the past passenger rail proposals is of course the rail line itself.

In 2015 CSX, which oversees the rail traffic, told former Senator and now Rutherford County Mayor Bill Ketron that they were not interested in allowing a passenger train on their tracks. Of course '15 was not the first year for CSX to say no to the idea. CSX has been saying no for well over a decade. CSX see's sharing the tracks used by freight cars as challenging, because the freight lines would always be given the right-of-way.

The dangers of mixing freight lines with passenger lines is evident, as seen in incidents like the train derailment that happened on Christmas day of last year.

On December 25, 2020, two train cars derailed and overturned near General Mills Drive and across the river from the bustling Indian Hills subdivision.

According to Murfreesboro Fire and Rescue, two tanker cars that came off the tracks and overturned were carrying propane. An inspection of the mishap was explored by not only CSX, but also investigated by the fire department's Hazmat team.

Since 2005, traffic volumes have increased by more than 60 percent in the Murfreesboro-Rutherford County segments of l-24.

One solution to reduce traffic jams in the midst of the traffic growth is to use technology on the interstate. A construction project that focuses on the new “Smart Corridor” will connect motorist with traffic updates, information on accidents and emergency related messages. The project will also lead to the state lengthening on and off ramps connecting to I-24.

The 30-mile project will be completed in phases in partnership with local municipalities, law enforcement, and transit and planning organizations. Construction on the Smart Corridor in Rutherford County is expected to be complete by the winter of 2024.