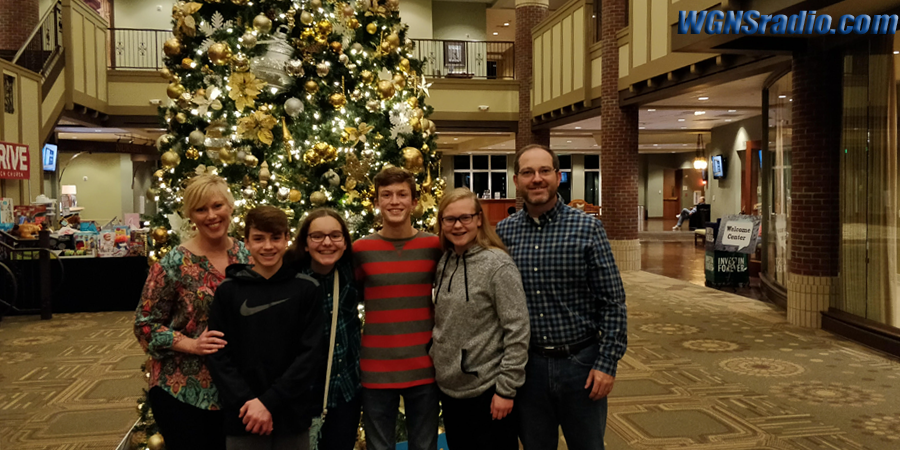 Brian and his family are pictured above

Middle Tennessee native Brian Toungette will be turning 50 on March 24. Though the "big 5-0" is a notable occasion for most people, this birthday is especially meaningful for Brian. After all, a 50th birthday wasn't something he could always take for granted.

In summer 2018, Brian started experiencing random health issues that seemed both minor and unrelated. His blood pressure shot up despite his healthy lifestyle, he began experiencing deeply painful headaches, and he was visited with strange bouts of dizziness. At an eye doctor appointment for his daughter, he decided to ask the optometrist if she could take a few minutes to check his vision. The optometrist noticed worrisome swelling and hemorrhaging in Brian's retinas and referred him to an opthamologist. That opthamologist, Dr. Trent Wallace of Tennessee Retina, would go on to request an MRI. While waiting for the results of his MRI, Brian flew to San Antonio, Texas, for a scheduled work trip. Almost as soon as he arrived at his hotel, he received a phone call from Dr. Wallace with an eerie request: "Please come home right away. I need to talk to you about something that cannot wait. You have a brain tumor." The airline assisted Brian with rescheduling his flights and he flew back home the very same day he'd departed. The entire flight home, the words "brain tumor" echoed through Brian's mind. He describes that flight home as lonely, dark, and terrifying.

ADVERTISEMENT
Upon his return home, Brian met with Dr. Steven Abram, a neurosurgeon affiliated with the Howell Allen Clinic at Ascension Saint Thomas Hospital Midtown. "Dr. Abram was very confidence-inspiring," recalls Brian. "He said, 'I'm going to tell you right now that your attitude will have a significant impact on how you go forward'." Through a biopsy, Dr. Abram was able to look at the tissue and learn more about Brian's specific type of brain tumor. Over the winter holidays, Brian tried his best to compartalize his fears so that he could enjoy his time with his wife Katie and their children. In early January, he returned to Dr. Abram's office for a briefing of sorts of his tumor and to strategize a game plan. Brian learned that his was slow-growing (good news) but also an unusual shape that would make it very dangerous and difficult to remove.

Over the next 60 days, Brian would complete 60 days of radiation under the care of Dr. Abram and Dr. Kent Shih of Tennessee Oncology. Radiation was followed by 6 months of chemotherapy that concluded in September 2019. "I felt like there had been an intervention on my behalf," recalls Brian. "I remember asking Dr. Shih what I needed to do now. He just answered, 'Live man, live'."

Post-chemotherapy, Brian continued to have routine MRI scans every 3 months. In December 2020, Brian received the disappointing news that the original tumor was showing signs of potential new growth. "Dr. Shih sent me back to Dr. Abram so we could do another biopsy to see what we were dealing with," explains Brian. "As part of that same procedure, he asked me to consider a new type of surgery called NeuroBlate, which is laser ablation of brain tumors. I agreed, and in mid-January, Dr. Abram performed the biopsy and the NeuroBlate procedure."

Dr. Abrams says, "NeuroBlate is a minimally invasive technique to treat brain tumors. With NeuroBlate, a surgery merely for diagnosis can be converted in the same sitting into a surgery for potential therapy. In Brian’s case, the evolving mass turned out to be a focus of radiation necrosis that we were able to stop the progression of with NeuroBlate. This was a success and he went home the following morning."

Brian, who is a self-described Disney Fanatic, is celebrating his 50th birthday with a trip to Disney World with his wife and kids. They have a family tradition of seeing how many times they can ride Space Mountain on any given trip.
Tags: brain cancer Murfreesboro Saint Thomas Tennessee TN treatment tumor
Sections: News