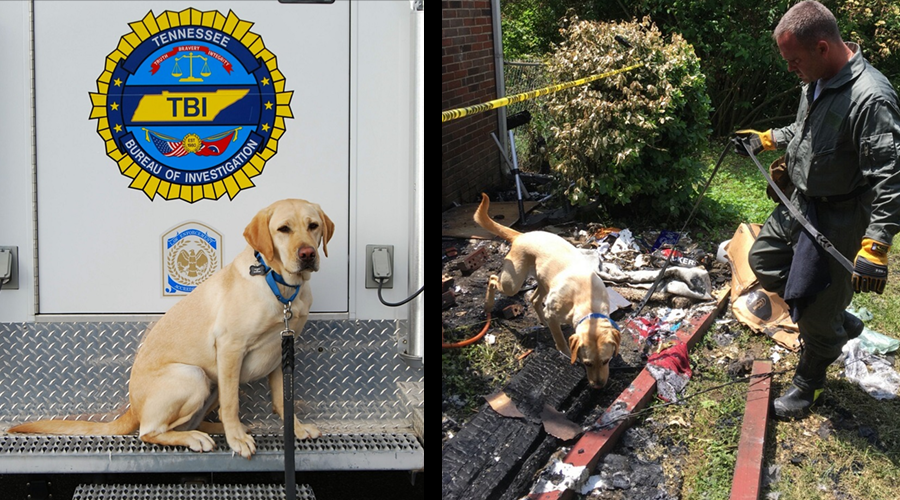 Faith is TBI's first Accelerant Detection Canine (ADC) and specializes in sniffing out evidences at fire scenes across the state.

The Tennessee Bureau of Investigation next week is hosting 58 canine teams as part of the Bureau of Alcohol, Tobacco, Firearms and Explosives’ annual Accelerant Detection Canine (ADC) recertification.

These canine teams consist of a handler and a Labrador Retriever, and come from partner agencies from across the United States.  The teams represent fire departments and law enforcement agencies responsible for conducting fire scene investigations.  Each canine team is also a member of ATF’s National Response Team (NRT). They are tasked with providing assistance to ATF anywhere in the US, and can be deployed to assist with fire investigations conducted by our federal law enforcement partners.

ADVERTISEMENT
Each canine is trained to detect the presence of the odor of liquid accelerants and to alert his or her handler to the presence if detected.  During the recertification event, each canine team will be tested and evaluated by ATF Forensic Scientists and members of the ATF National Canine Division, based in Front Royal, Virginia.  The series of controlled testing events will ensure the Accelerant Detection Canines are responding appropriately to the presence of the odor of a liquid accelerant.  Each Accelerant Detection Canine team is required to pass the series of tested events to remain current on their certification.