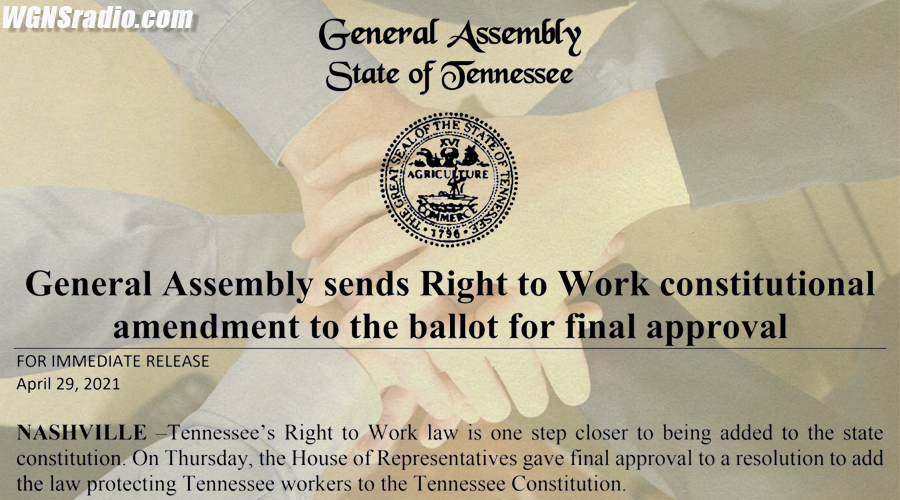 Tennessee’s Right to Work law is one step closer to being added to the state constitution. On Thursday, the House of Representatives gave final approval to a resolution to add the law protecting Tennessee workers to the Tennessee Constitution.

After three readings on the floor of the House, the measure received over the two thirds supermajority vote required to pass. Senate Joint Resolution 2, sponsored by State Senator Brian Kelsey (R-Germantown) and co-sponsored by Representative Chris Todd (R-Jackson), fulfills the second required passage of this measure by the legislature.

ADVERTISEMENT
In June 2020, Senate Joint Resolution 648, sponsored by Kelsey, overwhelmingly passed the General Assembly, which was the first step to enshrine the law to the Tennessee Constitution.

SJR 2 was passed by the Tennessee Senate in March with over two-thirds majority voting in favor of the measure. Now, in order to be added to the state constitution, the amendment must be adopted by a majority vote in the 2022 governor’s election.

“This amendment will guarantee future generations of Tennessee workers their right to work regardless of whether they choose to join a union,” said Senator Kelsey. “I am pleased this has passed its final hurdle in the General Assembly and I look forwards to its adoption.”

Tennessee’s Right to Work statute has been state law since 1947. It provides workers cannot be hired or fired based on their membership in, affiliation with, resignation from, or refusal to join or affiliate with any labor union or employee organization. When introduced in 1947, supporters of the bill argued that it would “be of great advantage to the average member of organized labor.” It also protects the rights of those who choose not to join a union.

“Tennessee workers want to make their own choices in the workplace and this amendment will forever seal that right,” said Senator Paul Bailey (R-Sparta), a co-sponsor of the legislation. “It also sends a strong message that Tennessee will continue to foster a business-friendly climate into the future for locating high quality jobs. There is no better place than our State Constitution to ensure that Tennessee remains a right to work state.”

Twenty-seven other states have Right to Work laws, and nine of those have passed constitutional amendments, including neighboring states Arkansas, Mississippi, and Alabama. The Alabama amendment passed most recently in 2016. Another neighbor, Virginia, has considered repealing its Right to Work statute. A constitutional amendment in Tennessee would offer greater protection for workers against such repeal efforts.

“Tennessee’s Right to Work laws have been critical to producing the economic growth our state has experienced over the last decade,” said Lt. Gov. McNally, a co-sponsor of the measure. “I appreciate everything Senator Kelsey has done to support the right to work in Tennessee.”

“Tennessee has been and will remain a Right to Work state,” said Speaker Cameron Sexton. “Solidifying this essential concept through this amendment will engrain this key principle of Tennessee business into our constitution. This will strengthen our economic standing, support our current and future workforces, and also ensure this state remains open for business.”

“Rhetoric from national candidates against state right to work laws has caught the attention of small businesses across Tennessee,” said Jim Brown, Tennessee State Director for NFIB. “In neighboring Virginia there was recently an effort to repeal its right to work law adopted in 1947, and in Indiana a judge ruled in 2013 that its right to work law was unconstitutional. Tennesseans simply prefer choices over mandates. For these reasons, NFIB strongly supports SJR 2, which will strengthen a key element that has made Tennessee an attractive state for businesses and workers.”

“The Tennessee Chamber and our business community has remained strongly supportive of our status as a Right to Work state which is a key component establishing the Volunteer state as friendly to business,” said Bradley Jackson, President and CEO of the Tennessee Chamber of Commerce and Industry. “Embedding Right to Work permanently in our constitution sends a strong message moving forward that Tennessee is and always will be ready for business.”

Beacon Impact, the advocacy partner of the Beacon Center of Tennessee also supports the resolution.

“While Right to Work has been the long-standing public policy of Tennessee, it is increasingly under attack,” said Justin Owen, CEO of Beacon Impact. “It is imperative that we protect the fundamental right of Tennessee workers to decide whether or not to pay union dues for generations to come, and the best way to do that is to recognize this right in our state constitution.”

There is also strong public support for the resolution. An October 2019 Beacon Center survey reported that 68 percent of Tennesseans favor the Right to Work policy, while 13 percent are opposed, and 19 percent remain undecided.

BELOW is a report filed by the Tennessee AFL-CIO Labor Council:

“With the Tennessee House of Representative’s final approval of SJR 0002, the Republican supermajority sent a clear message: our state is pro-business and anti-worker. In spite of repeated, powerful testimony against this harmful resolution over the past several months and hundreds of phone calls and e-mails, legislators once again chose to ignore the voices of working families and side with corporate special interests.

However, this vote is not is not the end of our fight. Now, it’s up to the people of Tennessee to decide whether or not they agree with their legislators when they cast their ballots next November. Already, working families across the state are having important conversations with their friends and neighbors about the dangers of enshrining Tennessee’s 'Right to Work’ law in the state constitution. Together, we will put the concept of solidarity into action, and we are confident that voters across the state will see through political power-grab.”
Tags: employee employment right to work Tennessee TN
Sections: News