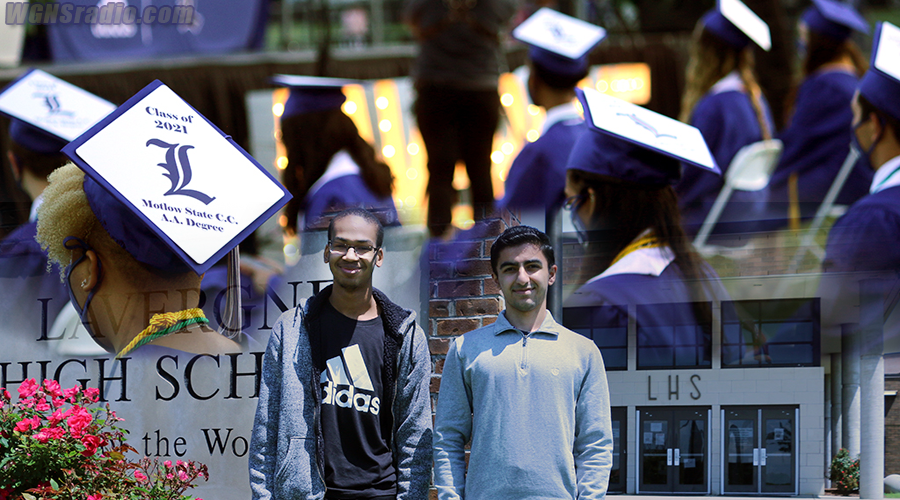 Article / Photo by James Evans: LHS seniors Ricky Martin (left), Rawand Aziz and Paige Adekplor (not pictured) are graduating members of the Early College program and they have been accepted to New York University, Princeton University and Yale University, respectively.

Yet all three LaVergne High School seniors are headed to those locations this summer, as they have been accepted to Yale University, Princeton University and New York University, respectively.

ADVERTISEMENT
Not only are they now graduates of LaVergne High School — which held its graduation Monday evening on the school’s football field — they have also earned associate’s degrees from Motlow State Community College.

Sunday night, they were among 35 students from LHS who earned their associate’s degrees, and then they received their high school diplomas Monday.

It was made possible by Rutherford County Schools’ Early College Program at LaVergne High School, a dual enrollment initiative created through a partnership between the school district, the high school and the college. The program allows LaVergne students to attend classes at both institutions during their junior and senior years.

With the associate’s degree in hand, the students can now enter the workforce immediately or can continue their education by earning additional college degrees.

“Most of them, a majority, are going to college,” LaVergne Principal Dr. Theowauna Hatchett said.

Paige received her acceptance to Yale a few weeks ago.

“April 6 at exactly 6:42 p.m. — I recorded it,” Paige said, after being asked when she learned about her Yale acceptance.

She is planning to major in biology on the pre-med track, Paige said.

“I wanted it for so long, but it hasn’t hit me yet,” she continued. “I think it will in August when I’m packing up my suitcase to get on a plane for Connecticut. I actually can’t believe I’m saying that out loud — I’m going to attend Yale University in Connecticut.”

She credits the dual enrollment program at LaVergne with giving her an advantage on her application.

“My admissions officer actually wrote me a handwritten letter and talked about how my application stood out because of the dual enrollment program,” Paige said. “She saw how rigorous my course load was and how that would definitely help me excel in an already exceeding community.”

She added: “Dual enrollment really pushed me up there — academically and characteristically.”

Rawand found out about his acceptance to Princeton last week while taking a math exam at Motlow.

At first, he thought it was a joke.

“I was taking the exam and my phone kept buzzing but I couldn’t answer it,” Rawand said. “After the exam, I checked my voicemail and it said it was some guy from Princeton.”

He called to say Rawand had been accepted.

“At first, I thought it was a scam because he was asking for my address and things like, but he was just confirming who I was,” Rawand explained, still in disbelief. “After he said I got into Princeton, I thought it was a joke but I checked my computer later and it was the real deal.”

He chose Princeton because many of the school’s alumni have been recognized as leaders and earned awards, such as the Nobel Prize.

Like Paige, he also plans to study pre-med and credits the dual enrollment program with preparing him for what comes next.

“LaVergne High School itself is really supportive and helped me with my application process,” Rawand said. “The dual enrollment program, it did give me a look at what I should expect in college with a more rigorous workload.”

Ricky learned of his acceptance to NYU in December.

He initially plans to study mechanical engineering but also wants to keep his options open during the first year. He chose NYU because he has a background in theater in high school and New York is known for its vibrant and diverse opportunities in drama.

During his high school career, Ricky has focused on being consistent with his work and striving for a high ACT score — he achieved an impressive 31 on his second attempt. The dual enrollment program gave him exposure to the college life.

“It helped me with time management, it’s helped me learn how to communicate with adults, in general, and improving my social skills and learning how to be punctual,” Ricky said of his experience with the dual enrollment program at LHS.

Hatchett — who has been the principal at the school this past year — said she it has been gratifying watching the students in the excel in the program and looks forward to seeing how far they go.

“I’m very proud, although I didn’t have them for all four years,” the principal said. “This has been a really great senior class and I don’t think any other class can top you.”

Associate’s degree opportunities are also available at Oakland High School in Murfreesboro, and seven Oakland seniors are graduating this year with a degree in Mechatronics from Motlow. Smyrna High School also has a program that will soon have students completing a college degree.