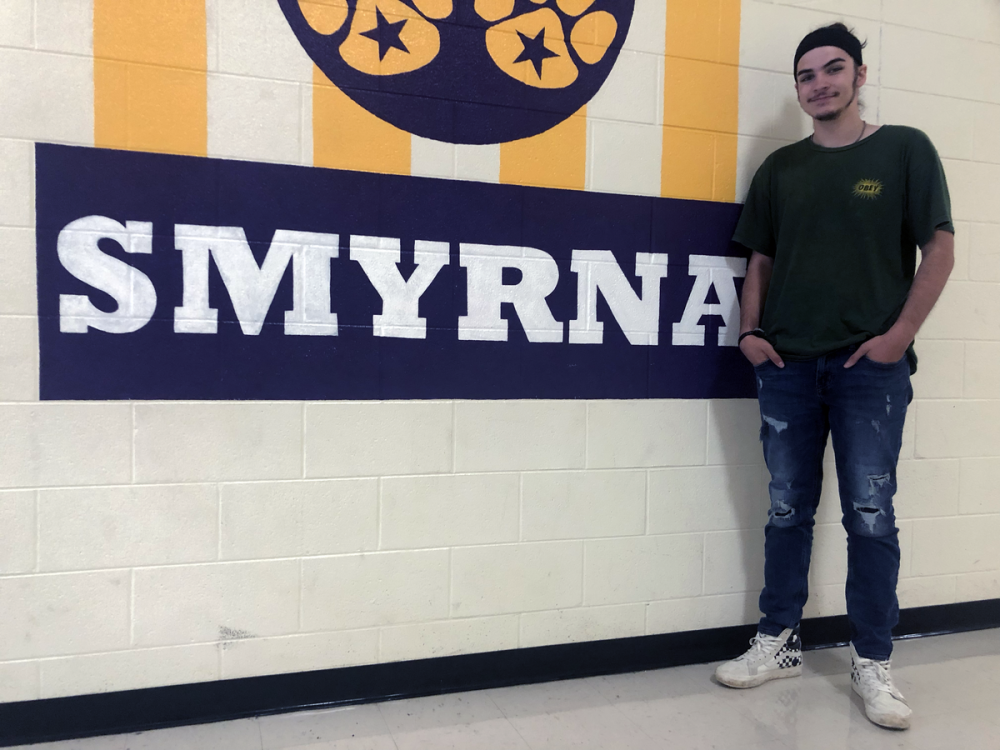 By KEITH RYAN CARTWRIGHT: A senior at Smyrna High School, he was initially enrolled as a distance learning student and by fall break, Jakob Salas was behind in every one of his classes.

The 2020-2021 school year was not ideal for anyone.  For some students, it proved to be problematic. Jakob Salas was one of those students.

A senior at Smyrna High School, he was initially enrolled as a distance learning student and by fall break, Salas was behind in every one of his classes. In fact, he was enrolled in an ACT prep course with teacher Kelly Wester, who said he had not turned in any assignments or returned a single email she had sent him.

ADVERTISEMENT
“It’s mostly my own fault for not doing everything on time,” Salas admitted. “Time management is a big thing, especially when you’re sitting at home doing your schoolwork. It is so easy for a person like me with ADHD to get distracted. I will be doing my work and then, ‘Oh, here’s a cat.’ Let me go play with my cats for about 30 or something minutes.”

Those 30 minutes became an hour and before long, it was 7 p.m. and Salas had not worked on his assignment.

Salas is the type of student who benefits from the structure of a classroom.

“With me, I actually wanted to be at school,” Salas said.

He thought distance learning “was a lot harder because online, they have a bunch of assignments for you to do in one day or two days. But, in school, I’m in class … which really would have helped me get all my work done on time.”

He added, “I got super behind … and I was rushing last minute to complete all my work and I got a 67, but I still didn’t have enough to pass, so I’m in credit recovery making up those points.”

He needed 70 to pass and graduate with his classmates.

Credit recovery differs from traditional summer school in that students have already unsuccessfully attempted the course, and their final grade was between 50-69 percent. Students in the credit recovery program spend the time they need to master the skills from their diagnostic test. For instance, Salas needed only two of the four weeks to successfully achieve 70 percent in his English IV class.

Credit recovery is offered Monday through Friday for three-and-a-half hours with students being able to either attend in the morning or afternoon. Some credit recovery students are working on recovering a pair of credits and attend both sessions.

This is the first-time credit recovery, which is typically offered during the school year, is being offered in the summer.

Conversely, summer school “could be a student who has already had a first attempt, but their grade was below 50 percent so they need to retake the entire course,” said Dr. Kay Martin, high school coordinator for Rutherford County Schools.

In past years, approximately 85 percent of the students enrolled in summer school courses are taking a course for the first time and hoping to work ahead of their classmates. In that case, they are either trying to get classes out of the way in an effort to make room for another pathway or attempting to graduate early.

This summer, a vast majority of students are either making up or recovering credits.

As of Tuesday, 1,073 students were participating in summer school and credit recovery.

There are 681 students recovering credits this month.

Salas has been a model student the past two weeks, which is in stark contrast to the student Wester had back in the fall semester when she said, “He didn’t say a word.”

“In this class, he helps the other seniors who needs help,” Wester said. “He’d help anybody. He is the one who comes up with answers.

Wester added, “He was not a bad kid. I don’t want to say that he was bad. He just didn’t care. … I can’t believe how much he’s changed now.”

He led by example.

Salas was never late, was always prepared and ready to work. Speaking of work, he has a full-time job at Jiffy Lube in Hendersonville and is in the early stages of pursuing a management position.

The two examples — his credit recovery course and experiencing his first job — prove when he is accountable to others, Salas has always had a sense of responsibility to others. Wester indicated he needed to learn and seems to have learned to expect more of himself.

“There’s no reason for me to be upset,” Salas said of a lesson learned the hard way, “because I did bring this upon myself. But, at the same time, I’m kind of glad it worked out this way.”

“He is a bright kid,” Wester said. “He could definitely go to college.”

As for the credit recovery program being offered during a four-week period in June, Wester described it as the best summer experience she’s had in her career.

“The students are motivated because they’re going to get that credit back,” Martin said. “It’s a very small classroom setting, they’re getting some of that one-on-one attention that is more different to get when I have a class of 30.”