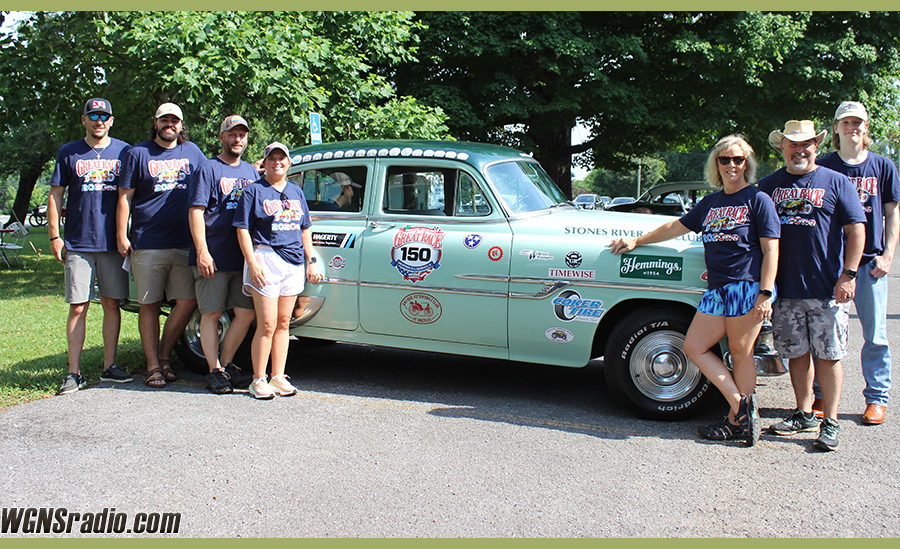 Four Central Magnet School graduates will concentrate not on speed but accuracy when they compete in the Hemmings Motor News Great Race starting Saturday in San Antonio, Texas.

The Great Race website explains the driver and navigator team receive instructions showing every turn, speed change, stops and starts for the day with about 220 to 250 instructions per day.

Teams are judged on their ability to follow the course precisely with every second off the time costing a penalty point. They cannot use a GPS or computers.

Navigator Aaron Guthrie said the directions are “specific but somewhat vague” in the nine-day race finishing June 27 in Greeneville, S.C. Navigators must remain calm and give exact speeds.

“You worry about getting directions right,” Guthrie said. “It is stressful. It’s down to the second.”

The team will ride in the 1953 Pontiac Chieftan nicknamed Bonnie, owned by their sponsor, the Stones River Region of the Antique Automobile Club of America.

This is the first year the team will be comprised of all Central Magnet graduates because they are all adults. Previously, Culp drove the Chieftan.

The team begins the race Saturday in San Antonio and will drive on back roads through Texas, Oklahoma, Missouri, Kentucky, West Virginia, Virginia, North Carolina and South Carolina until ending the race June 27 in Greenville, S.C. They will compete in the X Class for students.

Culp said the team stopped in Murfreesboro during their first race in 2017 and finished in second place. They captured first place in their class in 2019.

“My goal is to keep doing the race and have the Great Race come back through Murfreesboro,” Culp said.

“My concern is over the concentration and maintaining the correct speed,” Hendrixson said.

The navigators will take turns guiding him.

Norman said the navigators’ main role will be to communicate and relay directions and exact speeds to Hendrixson while he concentrates on driving.

Jenny Culp teaches history at Central. She will use the race as an opportunity to showcase U.S. history to students.

Mechanic Dean Holland of Creative Carriage Works donates his time for the race. He travels with spare parts for the 1953 model Pontiac in case of mechanical problems.

“If you break down and you can’t fix it, you’re done,” Holland said. “My favorite thing is to go out in the parking lot at night and help other teams. I’ve actually saved a couple teams.”

Culp said Holland is creative. Because Pontiac parts are not available anymore, Holland fashions parts from other models.

Holland’s wife, April, who teaches first grade at Lascassas Elementary School, volunteers with her husband to collect the car numbers each day and relay the information to the announcer.

She likes how the students use math to compute the speeds.

“The strategies and formulas they use to navigate is intriguing to me,” April Holland said.

Guthrie worries the advent of self-driving cars will result in a decreased passion for classic and vintage cars among younger people. He hopes the race will inspire kids to be intrigued.

Their team will be one of two Rutherford County teams in the race.

Brothers Chuck Bugg and Kirk Bugg will drive their 1961 Nash Metropolitan for the first time in the Great Race’s rookie class. Chuck Bugg’s son, Thomas, and grandson, Luc, 14, flew in from Europe to travel as the support team.

People may follow the teams’ progress on Facebook at Stones River AACA Student Group for the student team and The Great Race – Bugg Team for the rookie team.