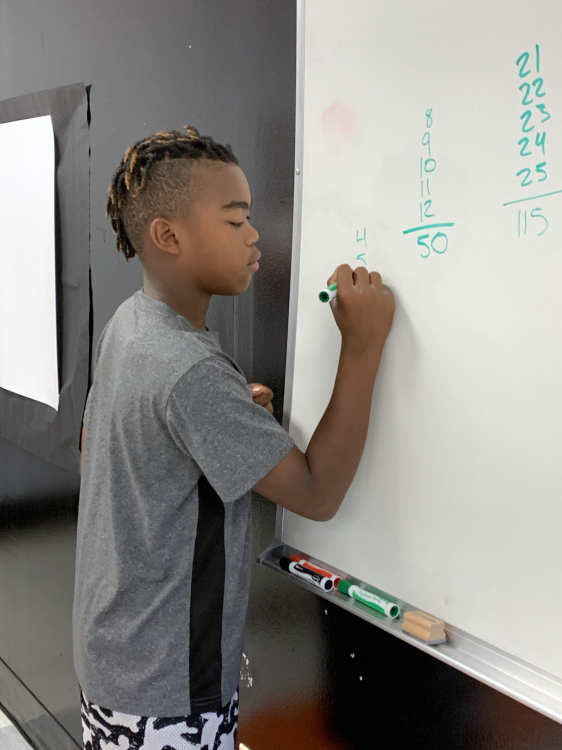 After 31 years in education, it all came down to 16 days for Kim Day to have one final opportunity to make a lasting impression on middle-schoolers.

Day has been a middle school math specialist for the past 17 years.

ADVERTISEMENT
On the heels of more than 14 months of education being interrupted by a pandemic with distance-learning and Zoom lessons and other non-traditional learning models, Day put together a middle school math curriculum for a four-week summer camp that primarily focused on fractions and solving equations and expressions.

The camp is not designed to teach new lessons so much as it is an opportunity for students to sharpen skills they already learned this past school year before moving on to seventh, eighth and ninth grades.

Many of the summer campers were distance-learners and the past four weeks provided them an opportunity to re-enter a classroom for the first time in more than a year.

And if Daffy Norment represents the typical summer camp student, Day’s impact will be felt for years.

Norment is convinced math will be easier than it otherwise would have been for him when he starts seventh grade in August. The LaVergne Middle schooler developed his newfound confidence for math in the first of four weeks at summer camp.

“I did not know how to do the magic trick,” said Norment, when asked why math felt so much more difficult throughout the 2020-2021 school year.

There is no magic involved.

Though, in the mind of an 11-year-old, it certainly felt that way.

“I think it’s been good for (students) to see a different way (of solving problems),” said Julie Wankel, who normally teaches sixth-grade math at Rock Springs Middle but has spent the past four weeks at LaVergne Middle for the summer learning camp.

“He’s a pretty sharp kid,” Wankel continued. “We always start off with a bell-ringer — (three or four easy problems the group can solve individually) — and it was kind of an ah-ha moment.”

She’s retiring next week. Yet her passion for math remains unyielding.

“This was an opportunity to say I’ve got 16 days, what can we do that is going to make a difference? Well, we can change their attitude towards math. We can give them some success in math.”

During a spring workshop, Day talked with instructors districtwide and four words that came up included proficiency, understanding, readiness and confidence.

“Before we ever started, I knew what I wanted to accomplish in 16 days,” Day said. “I was hoping to make (students) confident in math. I was hoping to strengthen some of those foundational things but, really, it had more to do with just how you feel about math and building confidence going into this next year.”

As a group, Day and the instructors saw these 16 days as an opportunity to try new things and, most of all, utilize the smaller class sizes and engage students one-on-one and in small groups.

Throneberry likened the structure of each 90-minute class period to targeted learning, so each time he met with a group or class, they focused on sharpening specific skills.

“Because of the amount of time that I can spend with each kid compared to a normal class setting, I’ve heard from at least three or four of them over the past couple of weeks, saying the repetitive structure of being able to come into class (and have one-on-one help from a teacher) when they raise their hand, definitely helps,” Throneberry explained.

She pointed out having the freedom to identify what one class needed versus the other, and therefore neither of her two sixth-grade math classes looked the same.

“One thing I love about (the curriculum) is you can pick and choose,” Wankel said. “(Day has) so many activities in there for you to do. … You don’t have to use everything she has in there. That’s been amazing.”

Instructors are free to tailor their daily lessons.

“I love seeing the kids excel,” said Wankel, who connected with a second student.

Only two of the 11 students in Wankel’s first class are from Rock Springs Middle, but she was unfamiliar with this particular student who attends Rock Springs. However, they have formed a bond and Wankel has arranged to become her mentor this coming school year.

“That’s interesting,” Day said. “It sounds like they’ve really made a bond, even in 16 days.”

It’s an example of experiences that will carryover from summer camp.

“These kids have done another month of school and they’re still giving effort, they’re still asking questions,” Throneberry added. “I feel like it’s kind of priceless … It’s been a great experience. It’s a great bridge from where they were to where they need to go.”

Throneberry is glad to have been part of piloting the summer program.

He loves the idea of doing it again next summer along with Wankel, who said that Day has been amazing.

“It’s kind of my, my last hurrah before I leave,” said Day, who has avoided the emotions associated with stepping away from education by remaining focused on the 2021 summer learning camps. “I am touched and moved that it made an impact.”