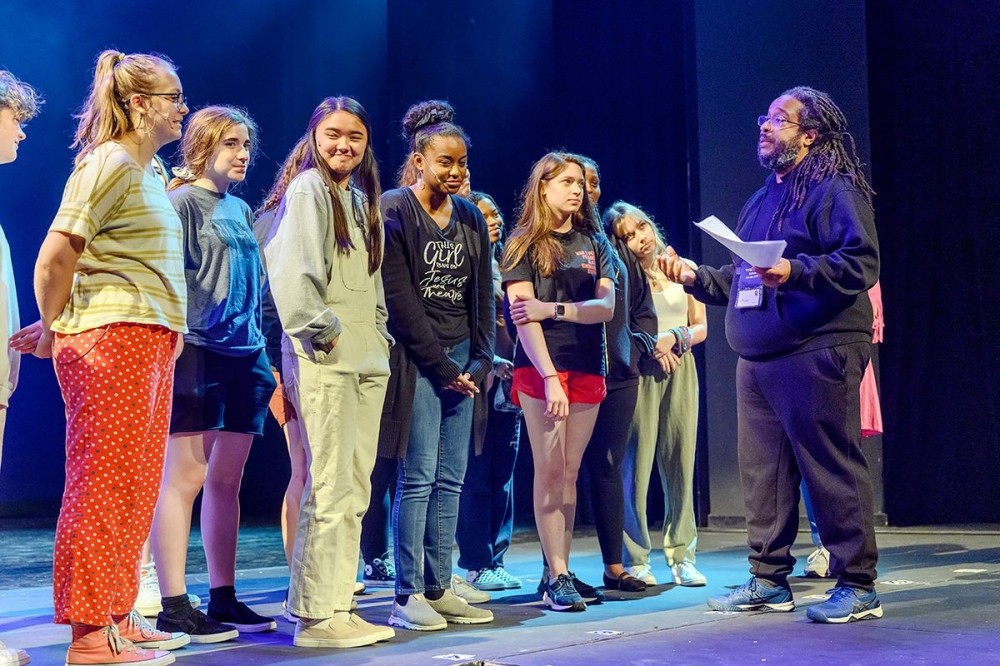 Actor, director and educator Jon Royal of Nashville, right, makes a point to a group of young theater students attending the 2021 Governor's School for the Arts at MTSU during a June 23 rehearsal on the university's Tucker Theatre stage. Nearly 300 11th and 12th graders from across Tennessee attended the monthlong residency program in person for intensive training in music, theater, visual arts, dance and filmmaking. (MTSU photo by J. Intintoli)

MURFREESBORO, Tenn. — After what 2020 and much of 2021 threw at them, this summer's round-the-clock Tennessee Governor’s School for the Arts at MTSU was a virtual vacation for its nearly 300 young participants.

ADVERTISEMENT
Even though some of their artistic efforts are by nature solitary, the 11th and 12th graders from across Tennessee were thrilled to be among fellow creative-minded people to brainstorm ideas, offer suggestions, listen to snippets of music or soliloquies, share supplies and computer screens and, sometimes, simply be together.

“The past year ... we've not really gotten to play with others, so the chance to play with other musicians, with no masks, and seeing everybody, makes it even more special,” said Cindy Liu of Germantown, Tennessee, a junior at Houston High School and one of the acclaimed flutists joining this year’s Governor’s School.

The Tennessee Governor’s School for the Arts, which concluded its 37th year at MTSU on June 26, welcomes public, private and home-schooled high school juniors and seniors in music, theater, visual arts, dance and filmmaking.

They apply or are nominated by their teachers and audition or present portfolios of their work. When they’re accepted, they come to MTSU for days filled with workshops and presentations and master classes and rehearsals and guest lectures and field trips and concerts and evenings that are much of the same.

It sounds overwhelming, and it could be. But the Governor’s School leaders are veterans at fitting all that learning into roughly four hours a day, six days a week. The rest of the time, the young artists can share their specialties with their new friends back in the dorms and around campus.

Last year’s MTSU Governor’s School was strictly online. Participants interacted with their instructors and fellow students in virtual classrooms via MTSU’s Zoom videoconferencing connections, then presented their projects by video from their homes.

This year, their theater monologues, dance rehearsals, instrumental and vocal exercises, filmmaking projects, and sketching, painting and sculpting processes were all up close and personal again, with only a few remote exceptions.

“In early planning for Governor's School, we first thought the whole thing would be remote, then we heard it would be both remote and in person, so the planning had to adjust and change and adjust again,” said Deanna Little, a professor of flute in MTSU’s School of Music in the College of Liberal Arts.

“I've been teaching in person all year, but it's primarily been in very small groups or one-on-one, and we've all worn masks, constantly. We were prepared to do that here, had we had any issues or anything, but luckily people have been safe.”

Tennessee established summer programs for young people in the arts, engineering and math, and international studies — one for each of the state's three grand divisions — in 1984 at the behest of then-governor Lamar Alexander.

Today there are 11 different Governor’s Schools across the state, ranging from agricultural sciences to teaching, to immerse students in their chosen fields for three to four weeks. Some give them college course credit, too.

Raphael Bundage, professor of vocal performance in the School of Music, has led the annual young artists’ school at MTSU for more than a decade. The MTSU school, which served as the Governor’s Schools pilot program in 1984, is Tennessee’s oldest and largest, boasting nearly 10,000 alumni.

One of those alumnae, newly minted MTSU music graduate Christine Barham of Franklin, Tennessee, has returned several times as a Governor’s School counselor. She lives in the dorms with the participants, serving as an adviser and fellow artist as well as a listening ear with a spare toothbrush or phone charger.

“I attended in 2013 and it's the reason I ended up going here to MTSU,” said Barham, who earned a Bachelor of Music degree in music performance in May with a recording industry minor. “Governor's School helps people decide whether or not if this is what they want to do. After going here, you think, 'Is this what I want to do for four more months or four more years?' And it's what I ended up doing, and I loved it.

“I love coming back, and … being able to hear all the performances and talking to the girls at night about what they've learned is really inspiring to me. I feel like I've learned a lot from being a counselor.”

The togetherness has been restorative for instructors, too.

“The first two days, I was so anxious, and I don't know what about, but it was weird to see everybody's face. It was weird to hear and watch people play without a mask. I guess I was a little bit shell-shocked,” said Little.

“But about three days in, it seemed like COVID was a distant memory. It's been so fun, and I also feel that I didn't really understand how much I'd missed human interaction, making music with others, and getting to really talk about flutes and music and have excited people around who want to learn and are interested. It's been fabulous.”

Their year of virtual high school forced many of the participants to live without the daily sights, sounds and experiences of interacting with their friends and classmates. Governor’s School, they said, helped restore their artistic world again.

“I've really enjoyed being in an environment where I'm surrounded by people that share common interests with me and are pursuing similar goals to me,” said Alliese Bonner of Mt. Juliet, Tennessee, a junior at Green Hill High School.

“It's been very welcoming; I've been able to make a lot of friends because it's such a positive environment for growth. I feel like we're all growing together and helping each other grow.”