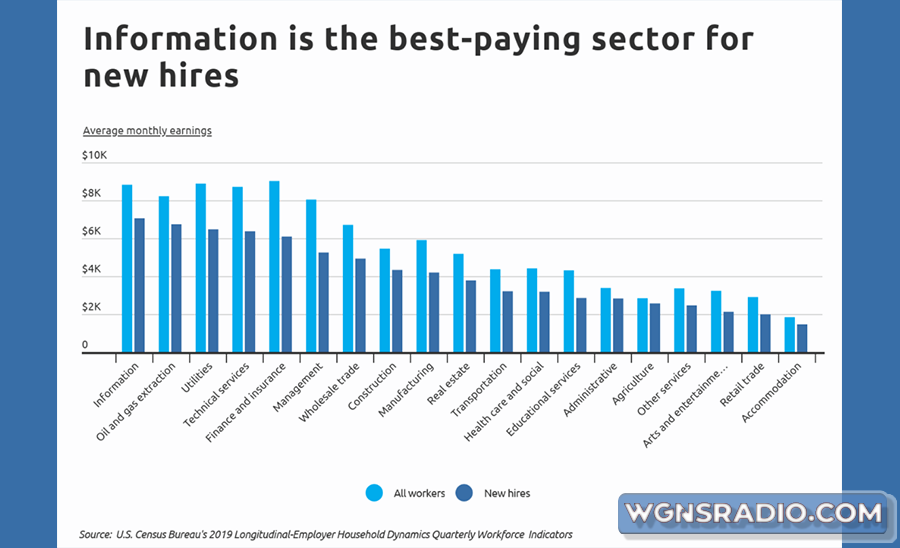 As the U.S. economy enters a new phase in its recovery from COVID-19, businesses are adding new positions faster than they can fill them. A combination of rapidly expanding job openings, a smaller labor force, and more generous unemployment benefits is pushing wages higher, especially in fields like leisure and hospitality that historically have some of the lowest wages for new workers. According to the latest data from the U.S. Census Bureau on new hires, average monthly earnings was $3,266 in 2020—a figure that varies widely by industry, job, and location.

New hires in the information sector—which includes many of the country’s computer programming and technology jobs—were paid the most, at $7,060 per month or nearly $85,000 annually. In comparison, all information workers (including new hires and existing employees) were paid an average monthly wage of $8,825. New employees in the mining, oil and gas, and utilities sectors also commanded strong wages when compared to new hires in other fields.
ADVERTISEMENT

Despite experiencing strong wage growth at the start of 2021, new hires in accommodation and food services have historically earned the lowest average wages, at just $1,458 per month or about $17,500 annually. Unsurprisingly, industries with low wages overall also pay new hires less, but the gap between new hire pay and all worker pay ranges from a low of approximately 11% in the agricultural sector to over 50% in fields like management, education, and the arts.

In addition to occupation and industry, location has significant direct and indirect effects on real wages. New employees in certain areas might command different wages for a variety of reasons, but differences in cost of living affect how comfortable it is to live on a given wage. When taking cost of living into account, new hires in Washington and Massachusetts earned the most in 2020, at $4,045 and $3,793 per month respectively. Other states with high adjusted wages for new hires included New York and Connecticut. Conversely, workers in Montana, Hawaii, and Idaho earned the least after adjusting for living costs.

The analysis found that new hires in Tennessee are averaging a cost-of-living adjusted $3,149 per month, compared to the $3,266 monthly national average for new hires.

Out of all U.S. states with complete data, Tennessee reports the 20th highest wages for new hires. Here is a summary of the data for Tennessee:

For more information, a detailed methodology, and complete results, you can find the original report on Self’s website: https://www.self.inc/blog/Cities-With-Highest-Wages-For-New-Hires