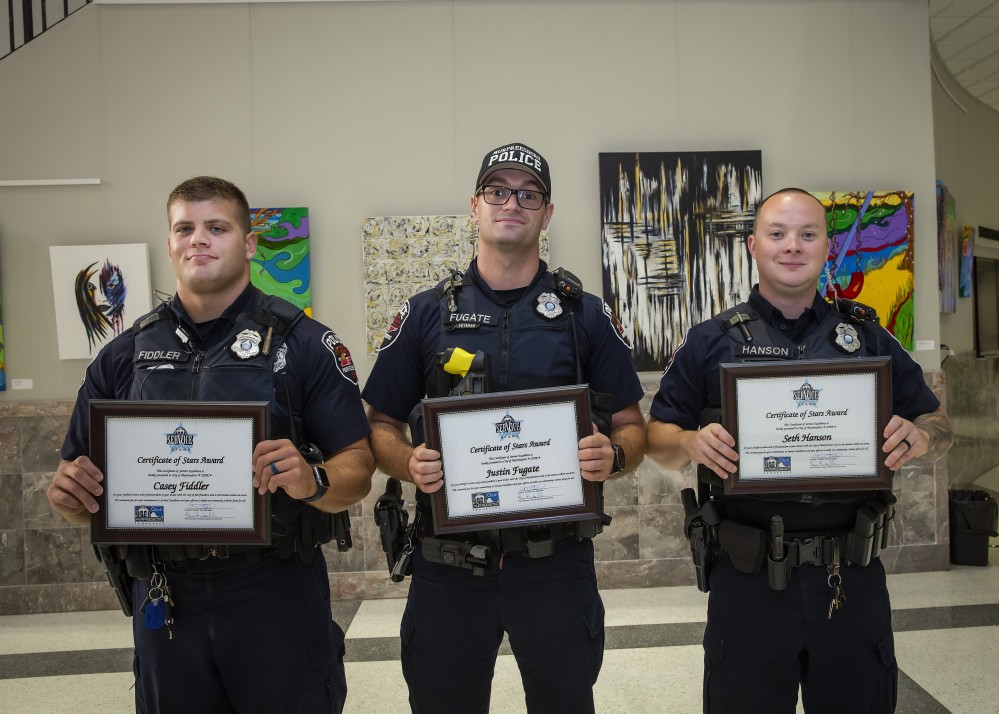 ADVERTISEMENT
The following description by Capt. Alan Smith nominated the officers for the STARS award:

“On June 15, 2021, officers responded to Spring Valley Apartments for an EMS assist, where a newborn child was not breathing.  Officers Fugate, Hanson and Fiddler all arrived at the same time and found the child not breathing.  The parents of the child were hysterically screaming and not providing any life-saving measures to save the child.  Officers attempted to provide treatment; however, because of the parent’s hysterical behavior, they kept interfering with the officers.  Officers Hanson and Fiddler were able to get the parents away from the child and once they were out of the way, Officer Fugate immediately picked up the child, rolled him over and gave the child a few stern pats to his back.  At which time, a large amount of baby formula exited the child’s airway.  Officer Fugate then rolled the child over and began CPR, resulting in the child breathing again.  MFRD and EMS arrived on scene and began to further treat the child.  As a result of Officers Fugate, Hanson and Fiddler remaining calm and immediately jumping in and working together as a team during a very stressful situation, they were able to quickly take control of the situation and immediately get to work at providing life-saving measures, resulting in the child’s life being saved.”

STARS stands for “Succeeding Through Attitudes Reflecting Service Excellence.” They are  examples of representing the City in a positive light, exhibiting the core values, and creating a better quality of life for citizens.

Congratulations to Officers Casey Fiddler, Justin Fugate, and Seth Hanson of the Murfreesboro Police Department for being named recipient of the June 2021 STARS Award for Outstanding Performance.