Tennessee Is the 9th Safest State for Cyclists 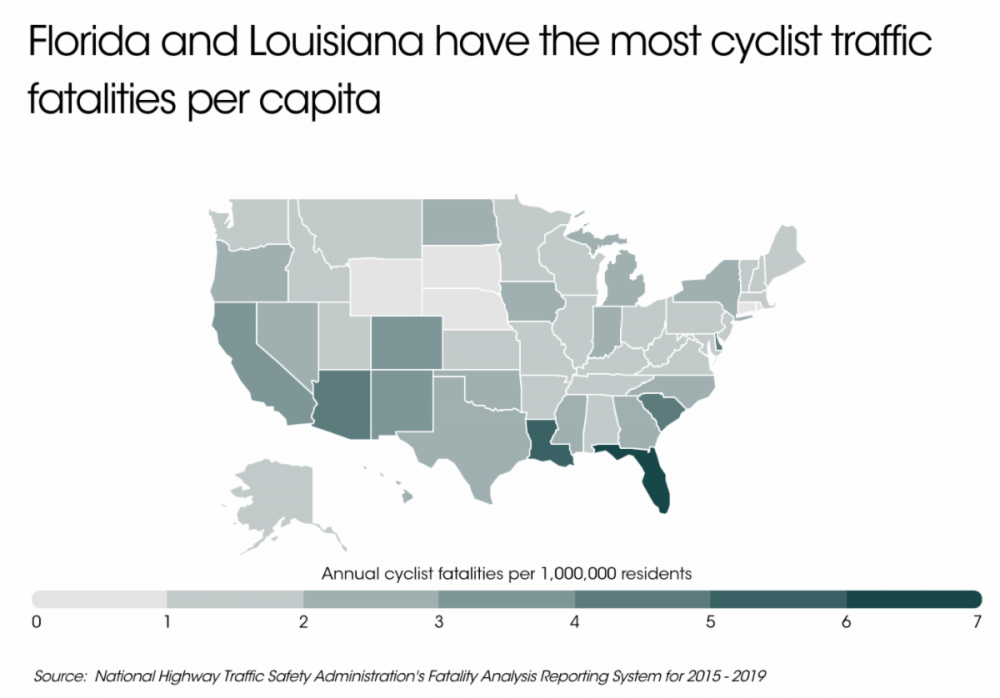 While cycling has grown in popularity in recent years, it has especially boomed during the COVID-19 pandemic as people moved to the outdoors to exercise and looked for alternatives to public transportation. At the same time, cycling has become more dangerous—according to the National Highway Traffic Safety Administration, cycling traffic fatalities increased by 35% from 2009 to 2019. Cities with bad traffic and less bike-friendly infrastructure are particularly dangerous for cyclists.

More cyclists on the road tends to mean more cyclist traffic deaths. In warmer parts of the country, where people can ride outside for longer portions of the year, cyclist deaths are more common. Between 2015 and 2019, Florida and Louisiana reported the most cyclist fatalities per capita, at 7.0 and 5.6 annual cyclist fatalities per 1 million residents, respectively. Looking at total cyclist fatalities, Florida, California, and Texas were responsible for 42% of deaths despite accounting for just 27% of the total U.S. population.

The analysis found that in Tennessee, 42 cyclists were killed between 2015 and 2019, which amounted to 0.8% of all vehicle fatalities over that span. On average, 1.3 cyclists are killed each year for every one million Tennessee residents. Out of all U.S. states, Tennessee is the 9th safest for cyclists.

For more information, a detailed methodology, and complete results, you can find the original report on CLIQ’s website: https://www.cliqproducts.com/blogs/news/the-most-dangerous-cities-for-cyclists