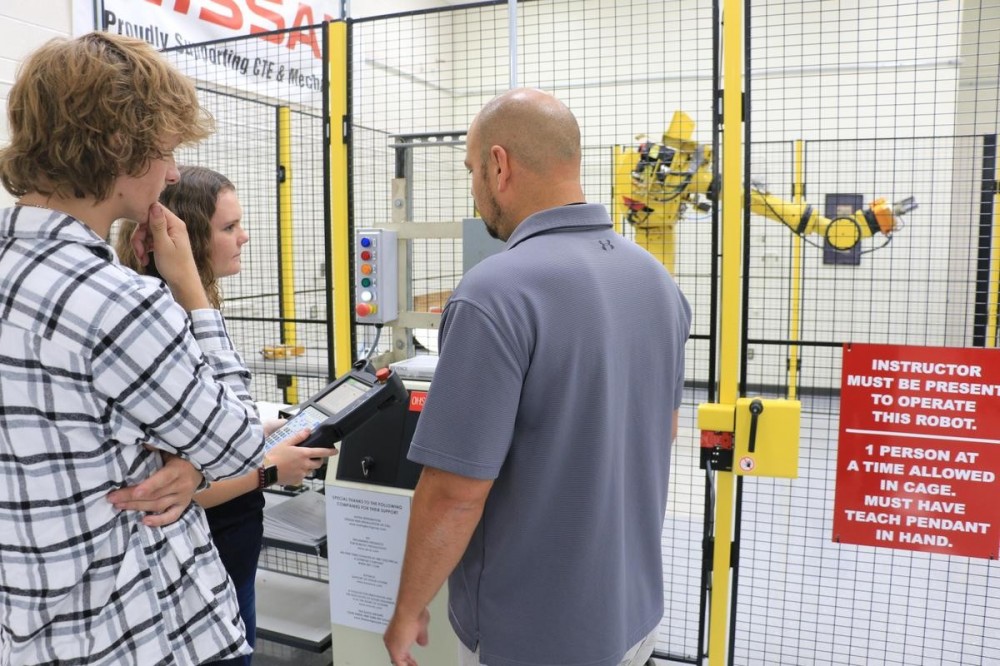 It had been three years since Dhruv Patel had been in the mechatronics classroom at Oakland High School.  After graduating in May 2018, Patel enrolled in the University of Alabama – Huntsville, where he is majoring in aerospace engineering. Last week, he was one of more than 10 former Oakland graduates who returned for the ribbon-cutting ceremony celebrating Nissan’s donation of a FANUC robot.

“It’s incredible,” Patel said about the growth of the mechatronics program, “how much progress has been made here over just the last three years.”

“You don’t get this opportunity to be around all this equipment and have so much time to just learn and figure what is going on,” Patel said, adding future graduates will be “miles ahead” of their fellow classmates wherever they attend college.

“Even in college the labs don’t come close to the amount of equipment that is here,” Patel continued. “There’s a lot more opportunity here than in just the normal lab classes (at a university).”

Kayla Boles, who graduated from Oakland in 2017, agreed.  “They’re going to be super advanced,” said Boles, who is a senior majoring in mechatronics at Middle Tennessee State University, “especially with the opportunity of graduating (from high school) and receiving their associate’s degree at the same time. That is amazing to put on their resume and it gives them … a leg up.”

Anthony, manager of digital and maintenance global reliability at the Nissan plant in nearby Smyrna, singled out Sagman as a “poster child” for what he described as “a very successful program” at Oakland.

Mechatronics instructor Leonard Ciletti addressed those gathered. He said to see so many former students return for what principal John Marshall coined “a very special day for us,” is an example of “the camaraderie we built here. They’re kind of their own fraternity and sorority here.”

“It can’t be done without our partners,” Ciletti continued. Ben Miles and Autumn Wisdom are two other Oakland grads from this past May. Both are planning to attend MTSU.

“It’s going to give a lot of people a lot of opportunities to be able to learn how to program these robots and to run these robots and maybe have a production job or quality (control) job,” Miles said, when asked about the benefit of having the FANUC robot. “It gets you a real deep dive into what it’s like to be able to run the robot and make it do certain actions. Instead of just reading about it, saying, oh, if you press this button it’s going to move up and move down. You get to actually see it and do it and have that interaction with it.”  > Wisdom agreed.

Like Boles and Patel, she talked at length about how prepared she feels going into her freshman. Wisdom is planning to pursue a degree in construction management and explained how the hands-on aspect of mechatronics taught her “to think in more complicated ways.”

Throughout the school year and as students in the program advance from one year to the next, Cilette continues to look for more partnerships and collaborations.

“I feel like it can always off a lot more,” said Wisdom, who is interning for The Davis Group. “I am very proud of Oakland and Mr. Ciletti’s mechatronics program,” Boles said. “The growth is amazing, and I can’t wait to see more.”

Patel added, “I can’t wait to see where this goes in the future.”