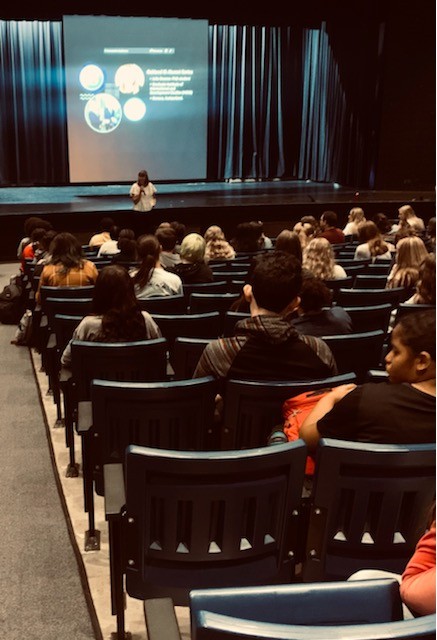 That’s all it took for Beth Nelson and her friends to feel a sense of relief when they stood up and walked out of the auditorium at Oakland High School.

Nelson admitted that she and other seniors often feel “so much pressure” on knowing where they are going to college, what they plan on majoring in “and the exact career path you’re taking.”

That was before approximately 160 students in the International Baccalaureate program at Oakland sat and listened to 2010 graduate Julia Greene assure them, she never imagined her personal and professional life unfolding the way it has over the past 11 years.

Greene was the first in a newly launched monthly IB Alumni Speaker Series, which began Aug. 18 at the school.

She was one of the first nine IB diploma candidates to graduate from Oakland before graduating from Rhodes College in Memphis. She was formerly employed by Crop Trust Diversity Trust in Bond, Germany, and is currently working on a Ph.D. in international relations and political science at The Graduate Institute in Geneva, Switzerland.

Her dissertation focuses on the politics of immigration, a path inspired by the coursework she completed while earning a master’s at the same school, according to her biographical information. Greene also works as a research assistant for a project funded by the Swiss government.

“It was just so comforting to hear … it’s OK to be comfortable in the fact and be confident in the fact that you’re part of this program that’s really going to help you succeed no matter where it is you end up,” Nelson said, “even if that’s somewhere you didn’t expect.”

Nelson later said, “If you’re worried so much right now about where you’re going for college, you’re not focused on doing what you need to do right now to even get there.”

Nelson, who plays basketball for the Patriots and plans to continue her playing career in college, is considering opportunities with a pair of Ivy League schools — Brown and Dartmouth — as well as a trio of other schools in the Northeast — Wellesley College, Swarthmore College and Carnegie Mellon University.

Though she may find herself several hundred miles from home, she found comfort in hearing how successful Greene has been in her journey to the other side of the Atlantic Ocean.

“I try to encourage (students) to think big,” said Randy McClellan, who teaches IB math and computer science, AP statistics and created the speaker series and scheduled the speakers. “Most students would never think about even leaving the area, let alone the country.”

T’Kayli Hutchins, a junior in the IB program, was inspired to learn Greene has traveled to most of Europe.

Hutchins, who is looking at colleges with a good computer science or math programs, would love to travel abroad and said, “It’s crazy how IB can take you that far.”

“Just to see someone who was in the place where we are now,” Nelson said, “but then to see where they’re going with their life and all the opportunities (IB) gave them, it was really cool to just see where the IB program could take me in the future.”

Nelson later added, “Even just the kids that graduated a year ago, they’re excelling at whatever college they decided to go to.”

McClellan came up with the idea during the latter part of the 2019-2020 school year and put the launch on hold during the uncertainties of the 2020-2021 school year. He also envisioned Greene being the first speaker of the series, so when he learned she was making a rare trip to Murfreesboro to visit family, McClellan quickly launched the series.

McClellan, who has kept in touch with a majority of the IB graduates, has booked future speakers through the entire school year.

November: Michael Zietz; IB class of 2015. Graduate of the University of Pennsylvania and was doing COVID-19 research in Spring 2020.

January: Hannah Ford (Waggoner); IB class of 2013. Former student athlete and graduate of the University of Alabama with a degree in Mechanical Engineering. Current Director of Partner Operations at Saviynt in El Segundo, California.

April: Alan Phrommala; IB class of 2012. Graduate of Berry College and currently an Anesthesia PA working at the heart center in Rome, Georgia.

May: Olivia Zietz; IB class of 2017. Graduate of the University of Pennsylvania and currently a financial analyst at a real estate investment trust in Pittsburgh, Pennsylvania.