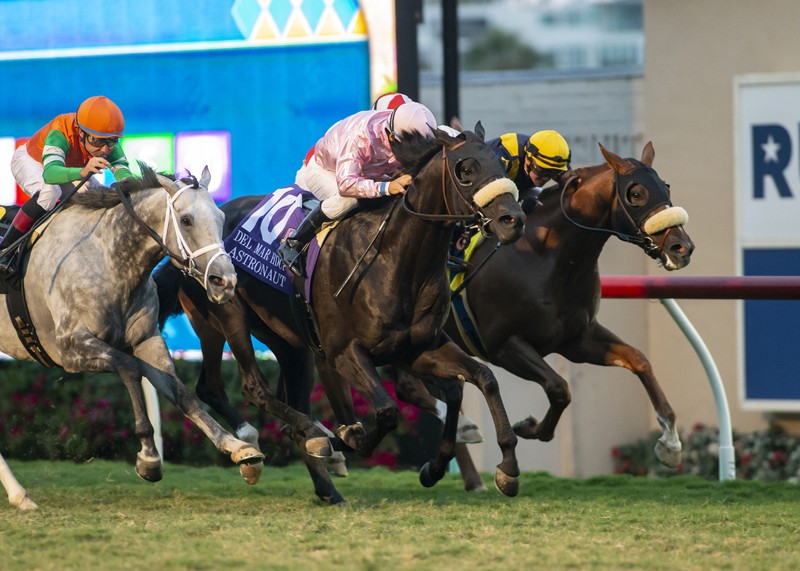 The sport of Thoroughbred racing has so many wonderful layers. Let’s take a moment or two to spin a tale of the magnificence of Del Mar on one of their biggest days.

Pacific Classic day is always a star on the calendar. The 2021 edition featured five graded stakes races and a pick six pool that reached $5 million. Now for those wondering, the pick 6 is a wager in which you try and select the winners of the last six races. You can pick multiple horses in each race, but the more you select the higher the ticket price. That being said, the struggle is to pick enough runners to have a real chance without breaking your piggy bank.

The great news for this hillbilly turf writer is Del Mar has welcomed me with open arms for some time now. Parts of the family make the trek and it’s always a very special time. For us, it’s exactly like Bing Crosby’s musical limerick regarding his brainchild. “There’s a winner in every race and a smile on every face down at old Del Mar”.

So here is where our story begins. My lovely wife, little chocolate chip cookie of a daughter, and her brainy boyfriend, were part of the posse. Teaming up on the pick 6 ticket and some other multi-race wagers, we all had our spot. My dearest can’t help but be knowledgeable as she is saddled with a guy that breathes the sport. The boyfriend is new to the game so he is not always tainted by numbers. And the little cookie grew up at the track with an uncanny knack for making sweet selections.

Three races into the pick six we had a live ticket. Of course excitement was pulsing through our veins as we were witnessing the wonderfulness of the Seaside Oval. Realizing the difficulty of hitting a wager like this, I called upon some sage advice from a professional handicapper. With three races left, we decided to play a late pick three ticket, incorporating some of the same horses as our pick six ticket, but throwing in a couple of others as well. That meant we could score with both, or still be alive with the latter if things didn’t go according to plan.

After making our choices in races 9 and 10, I asked everyone for their thoughts on the finale. The Del Mar Handicap closed the card with an 11 horse field full of talented runners. Immediately the cookie said “I like Astronaut”. He was 20-1 on the morning line, but as a veteran who donates to the windows frequently, I understand ANYTHING can happen and in these bigger stakes races they all have a chance.

A little closer look saw my man Victor Espinoza in the irons and the zen-master John Shirreffs as the trainer. Victor has won the Kentucky Derby on multiple occasions, the Triple Crown on American Pharoah, and was the pilot for one of my all-time favs California Chrome. Besides, you can’t cash a bigger ticket without some longshots and like I said, never doubt the sweetness of a chocolate chip cookie’s selection.

The pick six ticket was laid to rest in the fifth leg, which was the Pacific Classic. Thank goodness we had made a slight alteration on the pick three ticket so were still alive heading into the final leg. As working, functioning adults, our handicapping team had come to Del Mar to escape the rigors of the everyday world. Refusing to be saddled with the burdens life sometimes throws on our shoulders, we were all about the Del Mar Cap right now and nothing else mattered.

Watching the live odds before the race and seeing her selection was now at 24-1, I looked at my daughter and said “if you are shooting for the stars you need an Astronaut”. She smiled with the understanding that if her horse hit, the ticket would pay soooooo much more. My heart was pounding, stomach was churning, palms were sweaty, felt like I was about to pee my pants, man it was great!

As the horses were sent on their way, our runners were scattered throughout the field beginning the first lap in this mile and three eighths journey over the Del Mar grass. Watching our more favored selections, they curiously bobbed and weaved up the backside. Approaching the far turn we were so alive it was all too exhilarating. And suddenly it happened.

At the top of the stretch Astronaut blasted off. Using the instinctive abilities that have long made him one of the best riders in the history of the game, Victor split horses and sent his longshot to the lead. Unable to contain my emotions, I uncontrollably began cheering for that Astronaut that was going to take us to the moon.

Holding on by a half-length, Astronaut gave us an out of this world experience. Our track side table erupted with emotion as we slapped fives and exchanged joyous shouts of exuberance. Our collective love of the game for what it offers and the pride in my cookie for her pony picking were at all-time highs.

One of my favorite slogans about the sport is back a horse and get paid. Yes, our $32 ticket yielded $445, but this was not all about the money. The payout on the love bond created and the relief from the rest of the world during that time…priceless.

There’s a winner in every race and a smile on every face down at old Del Mar. 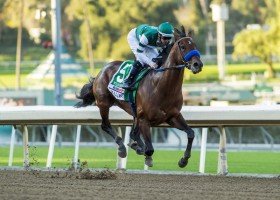 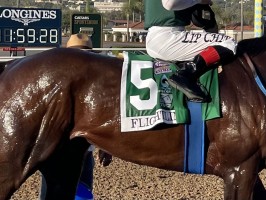 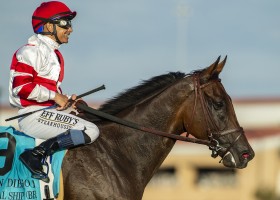 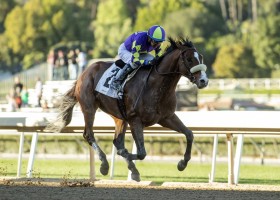